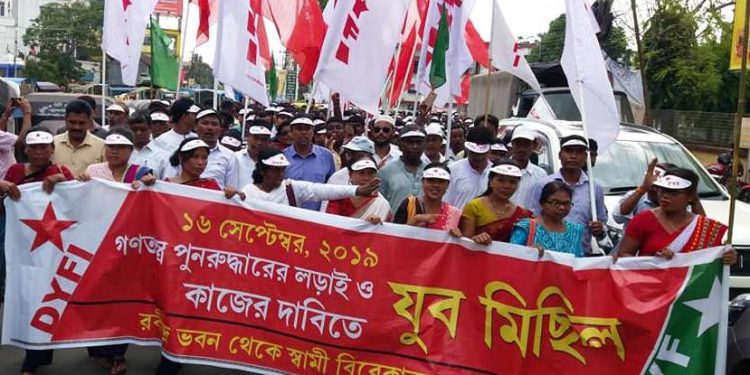 Hundreds of activists of the two youth organisations participated in the rally.

The activists of the Democratic Youth Federation of India (DYFI) and Tribal Youth Federation (TYF) on Monday took out a massive protest rally in Agaratala demanding creation of jobs and ‘restoration of democracy’ in Tripura.

DYFI is the youth wing of the Communist Party of India-Marxist (CPI-M).

Hundreds of activists of the two youth organisations participated in the rally.

This is for the first time after BJP coming to power such a large number of people participated in a protest rally taken out by left organisations in the state.

The rally started from Rabindra Bhavan passed through different points of the city and culminated at Swami Vivekananda ground.

Addressing the gathering, DYFI leader Nabarun Deb said democracy was under threat in BJP’s rule in the state.

“Several promises like creating 50,000 jobs were made by the BJP during the Assembly elections but not a single job has been created so far,” he said.

Deb said those who thought that the Left is finished in the state they are living in a fool’s paradise.

“The left is very much here and will continue to fight for the rights of the common people of the state. If the BJP government does not fulfil the poll promises, we will launch massive agitation across the state,” he said.