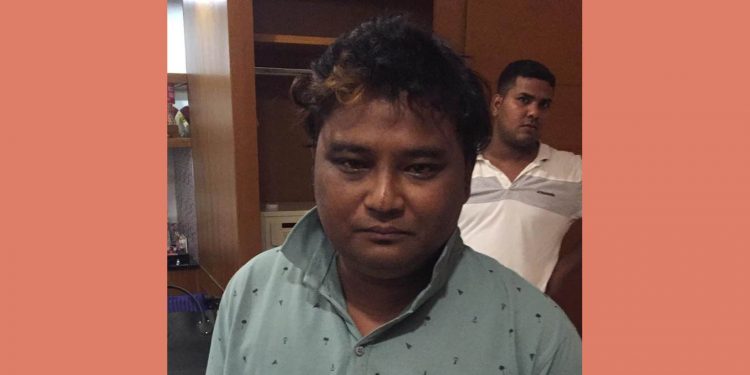 Despite having links with ruling party leaders, a youth, who had abused an on-duty traffic policeman in Assam’s Jorhat, has been arrested from a hotel in Goa.

He abused the on-duty traffic cop after being caught recently in an inebriated state.

The video of the scene had gone viral on the social media.

Raja Bailung has been arrested at Panjim in Goa late at 2 am on Sunday.

Jorhat Superintendent of Police Vaibhav Nimbalkar said, “Raja Bailung, a businessman, has been arrested from a hotel in Goa in connection with a case (no. 2167/19) under sections 353/294 IPC at Jorhat PS.”

The case was registered on the basis of on a complaint lodged by ASI Pradip Buragohain of traffic branch, Jorhat PS after he was insulted and abused by Bailung on the night of August 14.

According to the incident, Bailung’s vehicle had hit a motorcycle at Gar Ali and in the melee, an allegedly drunk Bailung had created a ruckus.

He allegedly abused the motorcyclist and on the intervention of traffic policeman Pradip Buragohain, he had also abused the ASI.

Though he had been picked up by the police that night he was set free soon after.

The SP admitted that they had received pressures from all quarters after the video went viral as such an act was not socially acceptable.

The hunt was started to track down the abuser since August 16.

The SP said on receiving information about presence of Bailung in Guwahati, a police team from Jorhat had gone to Kailash Nagar at Hatigaon in Guwahati two days ago but by then, he had already fled.

On a tip off, Bailung was traced to the Cidade de Goa hotel at Dona Paula area in North Goa district and a three-member team from here with the help of Police at Panjim arrested him late last night.

It may be mentioned that Bailung’s photos with several prominent BJP leaders were also uploaded extensively on the social media with condemnation that he was set free due to his political connections.

A BJP leader had, however, refuted this stating that he knew Bailung on a superficial way and that he was often accompanied or followed by all kind of people.

In another incident, Raj Barhoi Bora, assistant general secretary of All Assam Chutia Students’ Union, has been remanded to two days’ police custody.

He was arrested on Sunday night on charges of extortion and kidnapping of HirakJyoti Das, an employee of a private company based in Guwahati who had come here for an interview.

Bora was arrested from a Bolero in West Jorhat where he was taking Das to negotiate on the ransom amount.

Three others who were with him managed to flee.

The Bolero car bearing registration No AS01AH1235 was also seized in this connection.