In Assam, introduction of the PMUY has brought little changes in the health of the target group due to factors related to selection of beneficiaries and in distribution 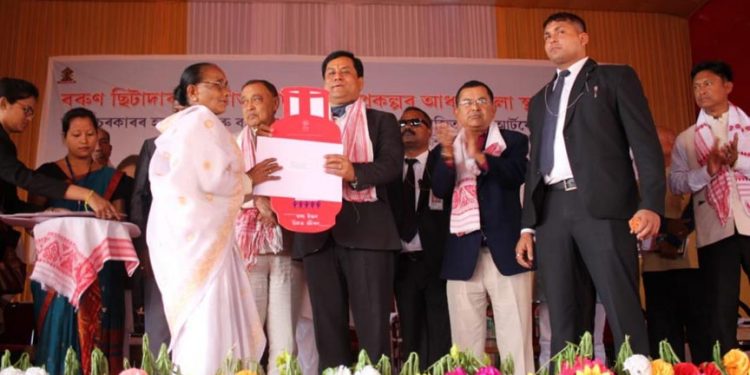 Deforestation has been a major concern for the planet for its environment in the last one-and-half-centuries leading to multiple problems like pollution and health hazards. There is a direct link between deforestation and air pollution as the loss of trees has an adverse effect on the air. The polluted air affects humans and animals as they need oxygen and inhaling of polluted and toxic air leads to diseases of various proportions amounting to be fatal.

India, having the second largest population on earth, has been facing the heat of air pollution due to the rapid loss of its green covers and increased emissions from the industries and vehicles. Household emissions, mostly that from cooking and heating, have been contributing alarmingly towards pollution in the air and thus to humans inside. In a bid to reduce household emissions and safeguard its people, mostly the women from the Bellow Poverty Line (BPL) category, the Government of India introduced Pradhan Mantri Ujjwala Yojna (PMUY) scheme in 2016. But in three years since its launch, the PMUY has not succeeded in reducing the pollution levels across the country.

In a state like Assam, the introduction of the scheme has brought little changes in the health of the target group due to factors related to selection of beneficiaries and in distribution. The continued deforestation and an ever increasing air pollution in the state has compounded the health risks of many in general and women in particular in the wake of the ambitious flagship scheme by Indian government to improve the health condition of women from pollution emanating from household emissions.

The forests of Assam fall in one of the two mega biodiversity hotspots identified in India, the Eastern Himalayas (Srivastava et al., 2002), and the other is the Western Ghats. Assam’s share in forest with reference to India is around 3.88%. Assam appears as a grand repertoire of mountains, gentle hills, mighty rivers, and sprawling plains covered with rich vegetation (Saikia, 2011). The forest areas form a network of habitat patches in the primarily agricultural landscape of Assam. The state is well known for its rich flora and fauna. Out of 15,000 flowering plants reported from India, 5000 grow in this region (Srivastava, 2002).

As the state of Assam falls in the tropical climate belt in the northeastern region of India, small scale deforestation in this state may be a matter of concern for the whole country. Tropical deforestation has attracted worldwide attention due to its potential effects on soil erosion, run-off and carbon dioxide level. Between 1995 and 1999, the forest cover of the state shows a rapid decline.

Deforestation is a complex process where different causal factors have their roots in different sectors. While it seems that direct causes such as agriculture / pasture expansion and forest products consumption/export are driving deforestation (Shafik, 1994), it is the underlying causes such as population and economic growth, which influence the direct causes of deforestation. In Northeast India, approximately 30% of total forest cover is under pressure of rapid land use changes. Extensive shifting cultivation, compounded by increasing population pressure and demands for agriculture land are the prime drivers in addition to other proximate drivers of deforestation in this region (Lele and Joshi, 2009).

The armed insurgency, the relying of the various insurgent groups on activities like illegal timbering, poaching, wildlife trafficking has also been a major concern for the rapid decline of forest cover in Assam in the last three decades. The continued dependence of households on fuel wood for cooking is also responsible for deforestation in Assam. Globally, fuel wood gathering is often a major factor in deforestation and about 1.5 billion people living in developing countries rely on fuel wood for cooking and/or heating (Tucker, 1999).

The figures indicate that 72.11% households in Assam depend on firewood for cooking and among the rural areas the figure is more than 80%. That means the state still has the tremendous burden of firewood collected from forest areas to light the chulas of kitchens. Therefore, forest areas bordering rural Assam have been fast shrinking due to the continued dependence on firewood for cooking purposes. In some urban areas, the kitchens of those – who do not have access to LPG and use firewood – are run by twigs collected from urban bushes, throwaway wooden products, cart board boxes, bamboos and plastics as well as polystyrene (C8H8) pieces used as protective cover in packaging. In both the uses, i.e. firewood and plastic or polystyrene the person engaged in cooking is directly exposed to pollution.

The felling of the tree for firewood has been contributing to the deforestation in Assam and also has contributed towards worsening air pollution in the state. Trees and plants, in general, produce energy for growth using a process known as photosynthesis. Using light, water and carbon dioxide, a plant produces energy in the form of sugar and releases oxygen into the air. Forests cover approximately 30% of the land on earth and sustain nearly 80% of the world’s terrestrial organisms. It is estimated that one acre of trees in urban forests can produce enough oxygen for eight people and remove 188 pounds of carbon dioxide from the air. Oxygen comprises only about 21% of air’s chemical component. Yet, it is extremely important to life on earth. Living organisms, from single-celled animals to humans, use oxygen to produce the energy required to sustain them. Since trees are larger plants, their production of oxygen is significant. It is estimated that tropical rainforests, produce 40% of the earth’s oxygen even though they cover only about 6% of the land. Carbon dioxide is one of the greenhouse gases that help to hold heat in the atmosphere. Trees remove some of this carbon dioxide from the air through photosynthesis and store that carbon in their tissues and in the soil. This process is known as carbon sequestration. Since the industrial revolution began in the mid-1700s, more greenhouse gases have been released than removed from the air. Deforestation reduces the removal component of this cycle, further increasing the carbon dioxide in the air. This results in an increase in temperature, an effect known as global warming.

The State Pollution Control Board (PCB), Assam in association with National Air Monitoring Proramme (NAMP) monitored from 2008 to 2014 in 22 different places of the state including six places in Guwahati where the presence of major air pollutants Sulphur Dioxide (SO2) Nitrogen Dioxide (NO2), Suspended Particular Matter were measured in a 16-hour period daily as per the National Ambient Air Quality Standards (NAAQS). In its report in 2014, the PCB says all the 22 monitoring towns report moderate level of air pollution with Guwahati and its nearby places recording high levels of pollutions. The presence of sulphur dioxide and oxides of nitrogen was, however, within the permissible limits at all the monitoring stations across Assam. But the data with the air quality monitoring stations in the state reveals presence of Respirable Suspended Particulate Matter (RSPM) and Suspended Particulate Matter (SPM) well above the prescribe limits since 2008.

The high presence of RSPM caused mostly by diesel vehicles on road traffic and commercial process like quarrying was monitored in zero industrial towns like North Lakhimpur at 121.00 in 2013. These pollutants of air cause pulmonary problems, asthma, bronchitis and pneumonia. The motor vehicle pollution checking outlets assigned by the state has also been a farce in Assam as they issue pollution certificates by taking a fee without conducting any test. This may be the reason that Guwahati city and four towns in Assam – Nagaon, Nalbari, Sivasagar and Silchar – have failed to meet the National Air Quality standards (MoEFCC, 2017).

In the backdrop of this air pollution caused due to deforestation and vehicular emissions, the introduction and the delivery of PMUY in Assam has to be assessed. The scheme launched in the state on 13th May, 2017 and since then 5,57,241 connections have been issued till 17th December, 2017 (Indian Oil Corporation Ltd). Though the latest data is not available, it can be assumed that a herculean task is waiting for the state to issue new connections under PMUY scheme to BPL households. According to estimates, carried out by Planning Commission in 2011-12, Assam has 101.27 lakh BPL people, which is 33.89% of the total population. As the gap is widening day by day, the health of poor women in the state is becoming more vulnerable to household pollution that adversely affects the several respiratory diseases/ disorders. As per a WHO report, smoke inhaled by women from unclean fuel is equivalent to burning 400 cigarettes in an hour.

There have been reports of discrimination and irregularities in issuing LPG connections to the BPL women in Assam. BPL women belonging to certain communities, living on the periphery of mainstream life are often rejected from the list of beneficiaries due to intervention by local politicians. Many women complain that their applications for the PUMY have been rejected despite having their names in the electoral rolls. In Assam, there are also allegations of awarding PUMY connections in others’ names instead of the original applicants and collection of money from the applicants for the connections by local service providers.

As a result, the scenario in Assam looks grim as poor women have to go many miles in achieving a cover from household pollution by getting the benefits from PMUY.

(This article is written as a part of inputs from the journalism training on Air Pollution and Health organized by Climate Trends and Vital Strategies in Goa from June 12 to June 14, 2019).

Farhana Ahmed is Northeast Now Correspondent in North Lakhimpur. She can be reached at:[email protected]