Congress does not believe the RSS has any solution for regional problems: Therie 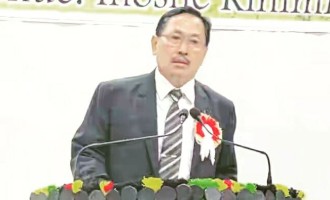 The Nagaland Pradesh Congress Committee (NPCC) on Wednesday said the Congress once again has adopted a policy to endeavour and solve the Naga political problem through peaceful and constitutional means.

“We mean it and given an opportunity, we will do it. We believe the welfare of people is the final solution,” NPCC president K. Therie said in a statement on Wednesday.

The state Congress issued the statement in the backdrop of BJP election manifesto team member Dr Sanjay M. Ram Paswan’s declaration in Kohima on Tuesday that the vexed Naga political issue would be settled after the Lok Sabha election.

Therie said the assurance of “Naga solution after Lok Sabha election” by Paswan has confirmed that there will be no solution before the election.

Therie said Paswan, who is a senior BJP leader, must have consulted top leaders of the party before coming to Nagaland.

He said the Congress does not believe the RSS has any solution for regional problems and alleged that “their goal is Uniform Civil Code and Hindutva”.

“Congress has given solution in the past. We have taken a back seat as direct talks were ongoing,” the Pradesh Congress said.

Acknowledging the difficulties and realities of the negotiations, it, however, said 21 years of negotiations without solution is “unreasonable”. People cannot continue to suffer, it added.