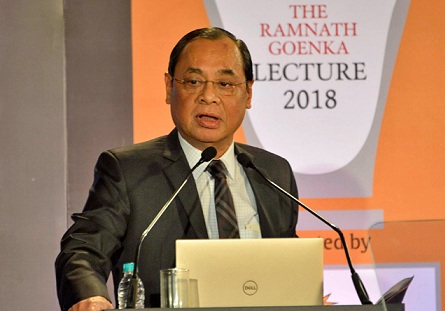 The Supreme Court has appointed Justice AK Patnaik (retired) to inquire into allegations raised by Utsav Bains in connection with the sexual harassment allegations against Chief Justice of India Ranjan Gogoi.

A Bench of Justices Arun Mishra, Rohinton Nariman, and Deepak Gupt ordered that Utsav Bains cannot claim privilege under Section 126 of the Evidence Act. He is bound to disclose all the documents.

CBI director and IB shief have been ordered to assist Justice AK Patnaik (retired) in this investigation, Bar and Bench reported.

Justice AK Patnaik (retired) to submit the report in a sealed cover.

Advocate Utsav Bains, who alleged that the allegations of sexual harassment levelled against CJI Gogoi was part of a conspiracy, submitted more information to the Bench in a sealed cover.

The judge also warned the Bar and the Solicitor General not to provoke him to say “many things”.

“Every day we hear of Bench fixing. Can the Registry be allowed to be managed by muscle and money power? This institution belongs to you (Bar). This institution has been built by  Nani Palkhivala, Attorney General, Fali Nariman etc. We (judges) come and go,” said Mishra.

CJI Gogoi has been accused of sexual assault by a former staffer who worked as a junior assistant at the  Supreme Court between May 2014 and December 2018.

In an affidavit filed in the Supreme Court, the former Court officer has alleged that following the sexual assault incident, she was unceremoniously terminated from her post. Moreover, she alleges that a trail of harassment has followed since her termination, culminating in a frivolous FIR filed in March this year against herself and her family.