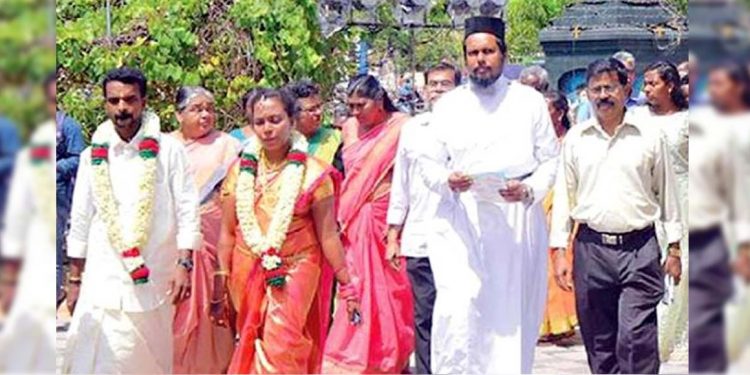 Bringing relief to the family of a cancer-stricken Hindu worker, a church in Kerala has come forward to fund the marriage of his elder daughter’s marriage.

The news has drawn the attention of all as it went viral on social media.

The church is located at Adoor under Pathanamthitta district of Kerala.

According to media reports, the wedding of Kala, elder daughter of Karthikeyan and Kunjipennu, residents of Theppupara in Ezhamkulam, and Renjith, son of Yasodharan of Nooranad, was conducted at the Sree Parthasarathy temple in Adoor.

The marriage ceremony, conducted as per the traditional rituals, was organized by the St. Mary’s Orthodox Church at Karuvatta in Adoor.

It has been reported that Karthikeyan was diagnosed with cancer in his mouth a year back and he has been undergoing treatment at the Thiruvananthapuram Medical College Hospital.

Reports said Karthikeyan, a rubber tapping worker, had been struggling to collect money for the marriage of his 27-year-old daughter.

The church after being aware of Karthikeyan’s condition and his family launched a Marriage Assistance Fund as part of its centenary celebrations in 2018 and decided to extend support by funding the wedding.

The report quoted church vicar SV Mathew Thuvayoor as saying that the church committee extended Rs 2.5 lakh to Karthikeyan so that he can get his daughter married.

Of the total fund, Rs 1 lakh was raised for the couple’s fixed deposit, Rs 1 lakh for ornaments and dresses for the bride and Rs 50,000 for the reception, added Thuvayoor.

This was the third marriage of girls belonging to poor families funded by the church at Adoor.