In a major turn of events, China has finally agreed to stop road construction activity across the Line of Actual Control near Bishing in Tuting area of Upper Siang district in Arunachal Pradesh, the Times of India reported.

Meanwhile, Indian troops returned the two earth excavators and other equipment seized from Chinese workers in the region last month.

“The Tuting incident has been resolved. A border personnel meeting was held two days ago,” said Army chief General Bipin Rawat on Monday, stated the report.

As for Doklam near the Sikkim-Bhutan-Tibet tri-junction, where the Indian Army and its Chinese counterparts were locked in a high-voltage confrontation for 73 days before finally disengaging on August 28 last year, Gen Rawat said there was a major reduction in the number of soldiers on the Chinese side.

The border personnel meeting was held in Arunachal Pradesh, with brigade commanders from the two sides leading the talks, on January 6 last. It was in late-December that Chinese road construction personnel along with uniformed troops had intruded almost a kilometre into Indian territory near the Bishing village in the Upper Siang district of the State but were forced to retreat after being stopped by Indian troops, who seized their two excavators and other equipment on December 28. 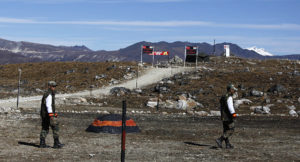 Unlike the hostility shown during the Doklam standoff, the Chinese troops this time ‘reacted very maturely to accept that the differing perception of the LAC’ had led its construction workers ‘to inadvertently transgress’ into Indian territory near the Bishing village, the TOI report said.

“They assured us they will take care to ensure their construction personnel do not cross over into our side again,” said an officer.

Road alignment and construction bids as well as troop transgressions across the 4,057-km LAC, which stretches from Ladakh to Arunachal Pradesh, are highly unusual in winter months. It is an indication of the heightened tensions between the two armies after the Doklam stand-off, which saw both armies move additional infantry battalions, tanks, artillery and missile units forward towards the LAC.