Centre has no plan to abrogate Article 371, says Amit Shah

30 per cent of NEC fund to be earmarked for priority and deprived sections: HM 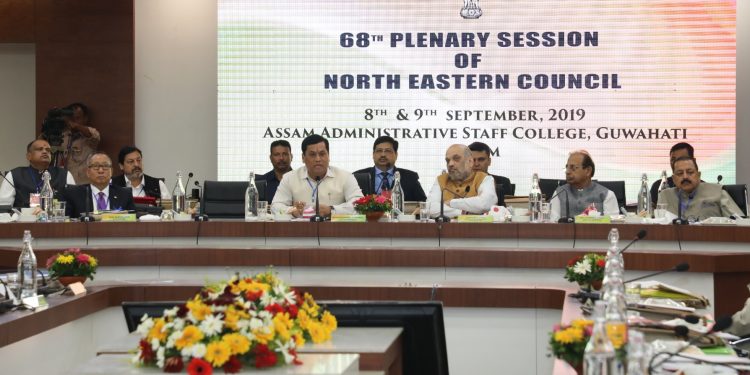 Union home minister Amit Shah, Assam CM Sarbananda Sonowal and other at the meeting in Guwahati on Sunday.

Union home minister Amit Shah on Sunday said the Centre does not have any plan to abrogate Article 371 of the Constitution which gives special status to the Northeastern states.

While inaugurating the 68th plenary of the North Eastern Council (NEC) in Guwahati, home minister Shah said the Union government abrogated Article 370 as it was a temporary provision.

“There is no plan to tinker with any of the provisions of Article 371 which gives special provisions to some states,” Shah said.

He said the NEC will earmark 30 per cent of its fund for focussed funding of priority areas and deprived sections of society in Northeast.

The home minister at the same time urged the Regional Planning body to prepare a roadmap for development of the Northeast by 2022.

Shah said that NEC would work for preservation and promotion of culture and language of the Northeastern states.

Urging the Northeastern states to take leadership in the development narratives of the country, Shah observed that connectivity boost in terms of roads, air and water by the NDA government would significantly help in catalysing NE region’s role in catapulting national development.

He also reiterated that all the Northeastern states would be connected through railways and airways by 2022.

Stating NE States’ less population density in terms of its huge land mass, the Union Home Minister said that this proposition has made the region an epicentre of development.

He urged the States to take up bamboo mission as priority sector and work for amicable settlement of inter-state border issues.

Home minister Shah further reiterated that not a single infiltrator would be allowed to stay in the region as the Government’s zero tolerance policy against illegal migration and insurgency would continue unabetted.

Speaking at the plenary session, chief minister SarbanandaSonowal urged the NEC to play an important role in the implementation of Act East policy with special focus on issues relating to trade, investment, tourism, connectivity and building relations with Southeast Asian countries in close coordination with various ministries of the Government of India.

Chief Minister Sonowal requested the NEC to provide special assistance to the Northeastern states to realize their export potential and suggested that the existing North East Industrial Development Scheme 2017 may be made more friendly to reap rich dividends of the business potential of the North East in view of the Centre’s Act East Policy.

He also requested the NEC and DONER to set up more medical colleges in the region apart from establishing KendriyaVidyalayas and Navodaya Vidyalayas.