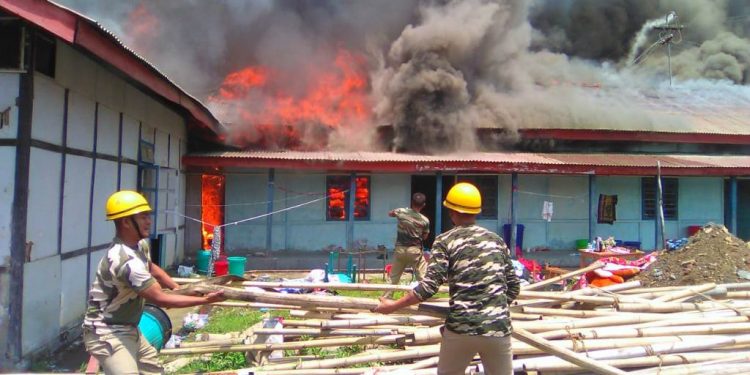 In a sensational incident, miscreants on Thursday night set ablaze a catholic school at Sugnu area in Manipur’s Chandel district.

Police officials said a class room including the office of the principal of St Joseph School was completely gutted in the arson that took place around 9.50 pm. While over Rs 35 lakh worth of property was damaged in the fire, no one was injured in the incident.

Police on Friday arrested arrested two executive members of the Kuki Students’ Organisation (KSO) for their alleged involvement in the incident.

The arrested KSO leaders have been identified as David Jamminlen Baite and Thangkhalal Haokip,

Police said investigation is on and operation being launched to nab other miscreants involved in the incident.

“We have arrested two executive members of the KSO so far. But, the involvement of the two student leaders is yet to be confirmed as the investigation is in the preliminary stage,” IGP K Jayenta Singh said.

The incident took place in the wake of the diktat imposed by KSO Gunpi block to indefinitely close down the St Joseph School following the failure of the school to revoke suspension order of six students of the school.