Students’ body warns lodging FIR and registering case against those who made the objections, if their claims prove to be false 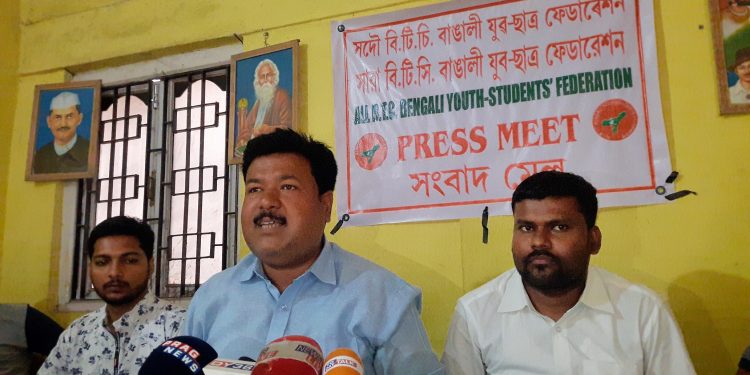 Chief Advisor,ABBYSF,Shyamal Sarkar addressing a press conference at Tangla in Udalguri on Monday

Fearing harassment and unfair treatment as a result of NRC objections and D-voter issue, a state-based minority association has alleged that certain communities are making false objections to harass minority communities.

The All BTC Bengali Youth Students Federation (ABBYSF) has claimed that certain organisations have raised false objection against many people from religious and linguistic minority communities included in the draft NRC with the sole motive of harassing and hounding the poverty stricken genuine citizens.

The complete draft published in July, 2018 had excluded 40.07 lakhs out of the 3.29 crore applicants. A window ending December 31, 2018 was provided for those left to file claims for re-inclusion.

Also read: Assam: SC wants NRC final list to be out by July 31

Addressing a press conference at the office of the students’ body here at Tangla in Udalguri district on Monday, the chief adivsor of ABBYSF, Shyamal Sarkar said, “Religious as well as linguistic minority people are being harassed in the name of NRC which is quite unfortunate and uncalled for,”

He further questioned that as to how many times must a genuine citizen have to pass several tests to provide proof of his/her citizenship to satisfy the agencies and the organizations even after inclusion of their names in final draft of NRC.

He mentioned that during the NRC draft preparation, the family members were subjected to undue mental harassment and torture in the name of discrepancies.

“This is a conspiracy by authorities to diminish the very existence of a particular community at the behest of some vested forces which the Apex court of the nation must investigate and identify,” Sarkar said.

He further challenged that if the indigenous student organizations who have been vocal on NRC can detect a single illegal immigrant in BTC who may have migrated post 1971, they would openly lend support to deport such immigrant.

He also stated that if the people who have filed claims otherwise fail to establish their stand and the claims prove to be false, the students’ organizations and individuals who have faced harassment will lodge FIR and register case against those individuals.

According to the official NRC authorities’ sources, about 2.5 lakh objections had been filed on December 31, 2018, the last day of filing claims and objections.