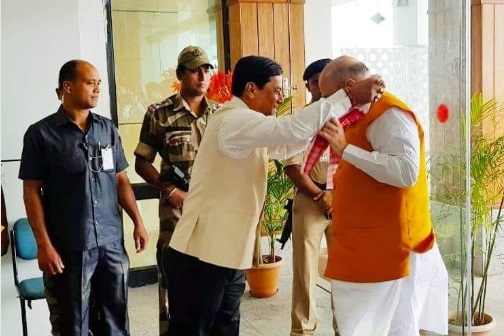 BJP president Amit Shah has arrived in Guwahati on Monday morning to the attend the State government’s function at the Veterinary College ground, Khanapara, where the ground-breaking ceremony of 19 new cancer centres, will be held in the presence of Tata Trusts chairman Ratan Tata and Chief Minister Sarbananda Sonowal.

Shah was received by Assam Chief Minister Sarbananda Sonowal at LGBI airport here. Sonowal welcomed him with a phoolam gamosa.

The BJP chief will hold three back-to-back meetings at the Brahmaputra Guest House with party leaders from across the State.

The first meeting will be held with the in-charges of all Lok Sabha constituencies of the State, followed by another meeting with the Assam BJP’s social media team.

Then he will preside over a meeting of the Lok Sabha Election Management Committee of BJP Assam. The BJP president may also hold a meeting with ministers of the State government.

“His meetings are basically intended to prepare a roadmap for our party’s Lok Sabha poll campaign,” said a senior BJP leader.