Is it a joke or a mis-information campaign?

It is clearly evident that the saffron party is “uneasy” with high-voltage protests against the Citizenship (Amendment) Bill in Assam.

And, the BJP’s social media team also has no knowledge of post-colonial history.

BJP’s twitter handle @BJP4India tweeted at 10.48 pm on Monday that in 1947, Bangladesh had 22 percent Hindu population.

It continued to claim that Hindu population in Bangladesh came down to 7.8 percent in 2011.

Initially, the piece of information came as a surprise for many. 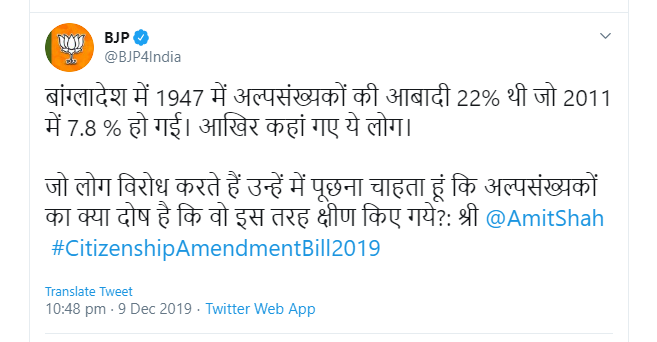 Everyone knows that Bangladesh was born as a country on December 16, 1971, after a nine-month long war with Pakistan.

And in 1947, there was no country by the name Bangladesh.

Soon people realised that the tweet was a quick knee-jerk reaction to the high-voltage protests against the CAB in Assam.

Though the tweet, the BJP also tried to woo sympathy of the common people of Assam by raising the issue – what is the fault of the minorities in Bangladesh?

“I want to ask the people who are protesting against CAB that what is the fault of the minorities that they are being persecuted like this?” the tweet quoted Amit Shah.