Beautification of stations in upper Assam by NF Railway has showcased the rich cultural heritage of the region.

The Tinsukia division of NF Railway has recently undertaken the task of beautifying the stations by depicting various art forms showcasing the rich culture and history of the region.

The project has been initiated in the New Tinsukia–Ledo section of the division to make the stations as aesthetically pleasing to the people as possible.

The stalls and available spaces in the station premises have been painted with mural frescoes and art work in relief with the help of local artists. 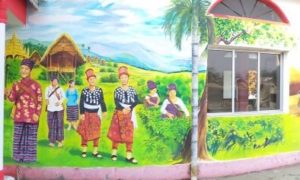 Talking to Northeast Now, Tinsukia divisional railway manager Prashant Mishra said, “Our main objective is to showcase the rich cultural ethos of Northeast as well as Assam through beautification of stations. So, we have taken a project to beautify the railway stations of New Tinsukia, Old Tinsukia, Digboi, Margherita and Ledo. So far we have completed the project of beautification by giving a glimpse of the rich culture of Assam by painting the walls of Railway stations.”

In the New Tinsukia station, the journey begins with the mural paintings depicting the social milieu of the region on the wall of platform number 1 towards the Tinsukia town end. The paintings were done by artist Mukul Duarah and his team of painters. The effort was well appreciated by the general public.

The façade of the station building which offers a much bigger canvas was then chosen for a slightly different genre of art by yet another reputed artist of Tinsukia Tridib Dutta and his team. The entire top panel of the façade of the New Tinsukia station has been painted with hues depicting the entire panoramic perspective into the daily life in the country side of various communities residing around Tinsukia district of Assam.

The Old Tinsukia station, situated at the centre of the town, was chosen to be painted with the abstract art form. Yet they have been painted and depicted in a way that is relevant to the life and style of the town itself. In one of the larger walls of the station, a massive depiction of the great Moran Muttock king Sri Sarbananda Singha is being showcased.

The theme selected in Digboi station is the story of oil itself. The entire façade of the inner walls of the station under the platform has been converted into a virtual wall canvas. The entire history of oil, right from the first well to the refinery as it stands today was depicted there. On the outer walls of the station, the local musical instruments are depicted along with a beautiful sculpture of a human hand safely holding a tree, which is expected to motivate people to save trees.

The theme chosen for Margherita station is the local community, the Singphos. Margherita is synonymous with the Singphos. Hence, the available spaces in the stations have been dedicated with the depiction of the life of this very old tribe of upper Assam.

In Ledo, the theme is coal and some relief work in panels showing artists impressions of World War II and the historic Stillwell Road. At the entrance to the station and on the walls on either side of the aisle, relief work depicting working in coal mining has been created. Further into the station, near the platform no. 1, cement sculptures have been created to give the station a beautiful look. On the façade of the station and in the available spaces, various painting murals have been done depicting the very essence of the populace of Ledo and its surroundings.