A number of dwellers of Chapaloga and Nalghuguri, two forest villages in Nameri National Park, where they have been residing for last several years, said they had been deprived of basic amenities even after 72 years of Independence.

“Although we have been paying revenue to forest department for decades, we have often been denied the basic amenities and benefits of the flagships programmes of the government,” said Tankeshwar Das, a resident of Chapaloga forest village.

The residents of the two forest villages—Chapaloga and Nalghuguri—located in the Nameri National Park in Sonitpur district, came to narrate their ordeal at a daylong awareness campaign organised by Udyama, a Delhi based environmental organisation, in the national park recently.

As a part of this awareness programme, two public consultation meetings were conducted in the two adjoining forest villages a group of three members. 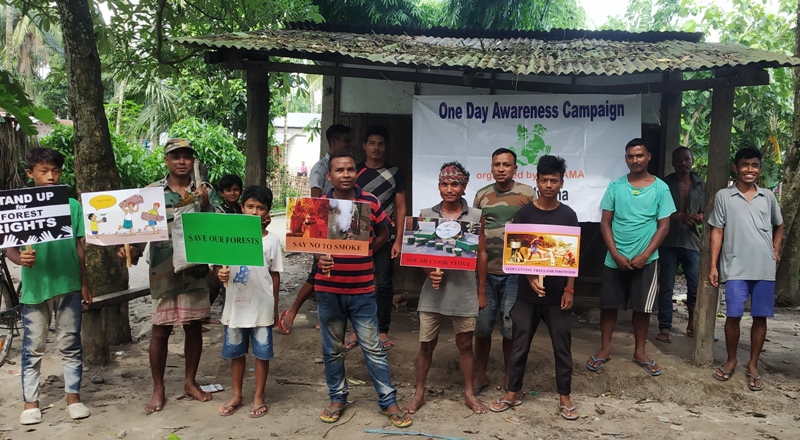 In the dialogue, several issues were discussed such as prospects of Forest Rights Act (FRA), 2006, forest encroachment and destruction, decaying village commons and forest conservation.

Another issue which was raised by the villagers in the public consultation is non-implementation of FRA, 2006 in the region.

Elaborating the issue, Pinku Muktiar, a researcher, who has been working on issues such as changing rural landscape, said that FRA, 2006 only gives land rights to those tribal people who have been residing in forest areas for at least 75 years.

“However, here in Assam the formation and evolution of forest village is different from the rest of the country. A vast non-tribal peasantry of the state has been living in the fringes of forest for decades,” Muktiar added.

He pointed out that the big earthquake of 1950’s had substantially raised the river bed of Brahmaputra and drastically changed the rural landscape of the region.

“In the aftermath of it, the state witnessed massive recurring flood and erosion in the last 60 years. In such a backdrop, the most of the rural peasantry has moved and settled in the fringes of forest. The existing forest conservation policy does not cover these vast numbers of peasantry, who lost their land and livelihood in natural calamity,” he said.

A number of villagers slammed the government for apathy towards their problems.

The Central government schemes are still to make a difference in the lives of the village, they said.

It is to be note that landlessness is major problem in the state. Apart from perennial flood and erosion, the various tea estates in the state have also occupied thousands of fertile agricultural land resulting in the severe land scarcity in the state.

The encroachment and destruction of forest was also discussed in the consultation with the villagers.

The villagers said that earlier there was lack of awareness among the people for forest conservation.

The issue of growing human-animal conflict was also discussed in the meetings.

People from the area shared their thoughts for mitigation of growing human-animal conflict.