Do you want to read JPC Report on Citizenship Amendment Bill 2016. Here is the full report 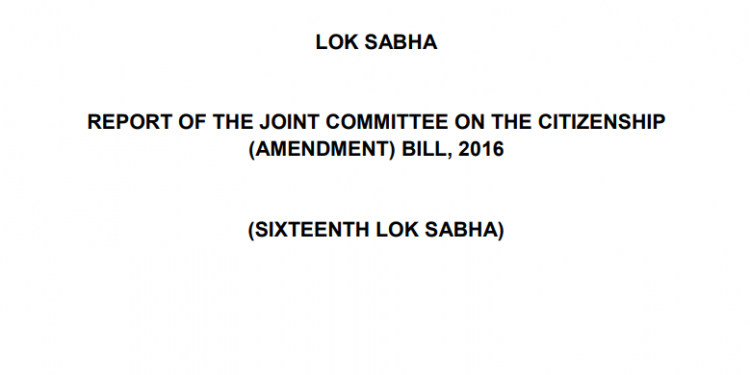 Barring a few minor changes, the JPC recommended for introduction of the original form of the proposed legislation, which seeks to grant Indian nationality to people belonging to minority communities, other than Muslims in Bangladesh, Pakistan and Afghanistan.

Here is the complete JPC Report on Citizenship Amendment Bill 2016 –


The Bill will be passed in the Lok Sabha on Tuesday that is january 8, which is the last day of the Parliament’s Winter Session.

Immediately after the recommendation was tabled the Lower House witnessed an unruly scene with the Opposition creating a ruckus.

The Citizenship Amendment Bill, 2016 has been the focal point of debate and discussion specially in the state of Assam for quite some time now. As an amendment directed towards the Citizenship Act of 1955, the government through this Amendment bill seeks to radically change the definition of illegal migrants.

What is the Citizenship Amendment Bill 2016?

This issue of modification of the grant of citizenship has seen the country in turbulence in recent times. Poignantly therefore, the Centre constituted a Joint Parliamentary Committee (JPC) to discuss and debate the provisions sought to be amended and implemented by the Bill. With a host of members from both the Houses of the Parliament, the Committee was formed on 11th of August 2016 under the Chairmanship of Shri Rajendra Agarwal. Finally on January 3rd last, he JPC adopted a report clearing the contentious Citizenship (Amendment) Bill, 2016 and tabled the same in the Lok Sabha on January 7.

While the move to legalise illegal immigrants under the amendment Bill has been supported by the JPC on the ground of propagating humanitarian ideals, the Committee also noted that the grant of citizenship to these people who had migrated into Assam would however extend beyond the purview of the Assam Accord to cover the issue in the whole of India.