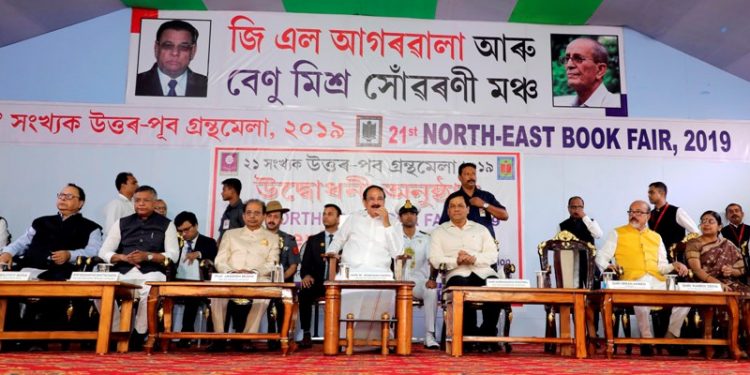 Vice President M Venkaiah Naidu and others at the inaugural meeting of NE Book Fair in Guwahati on Friday.

The book fair organised by Assam Publishers and Book Sellers Association witnessed the participation of around 76 publishers.

Speaking on the occasion, Vice President Naidu laid stress on starting a library movement saying every village should have a library.

Naidu said that books open the minds of the readers and enhance the analytical skills and stimulate the creativity of the readers.

He also advocated that book fairs should be organised in every district because they help in creating intelligent, resourceful and compassionate minds.

He said the library movement that flourished in different parts of the nation has played a critical role in the socio-cultural renaissance of India.

From Andhra Pradesh to Punjab to Maharashtra to Kerala, the library movement swept the length and breadth of the country, bringing the light of learning and knowledge to the darkest corners of the nation.

He also said that this legacy of the library movement should be kept alive.

Hailing the organisers, Naidu said that the book fair being held in the city, is a befitting tribute to Assam’s love for language, literature and culture and he is confident that the book lovers of the region will collectively make this fair a resounding success.

Naidu said that India’s tryst with books and literature is almost as old as the 5000-year-old civilization itself.

The vice president said that India represents the largest democracy with a seamless picture of diversity in unity, perhaps unparalleled anywhere in the world.

From ancient Indian literature to contemporary forms, India has been and still is home to hundreds of talented writers and gifted poets and said that this legacy of literary brilliance will be kept alive by generations of writers to come.

Assam governor Jagdish Mukhi said NE book fair has earned its reputation as a mega book fair of the region.

He also said that the book fair is popularly known as ‘People Book Fair’ because of the spontaneous public support it received from all sections of the people.

He said that book fairs are the agents to popularise the books which delve on the culture, literature, heritage and ethnic tribes of the state.

Education minister Siddhartha Bhattacharya and several other dignitaries were also present at the inaugural function.