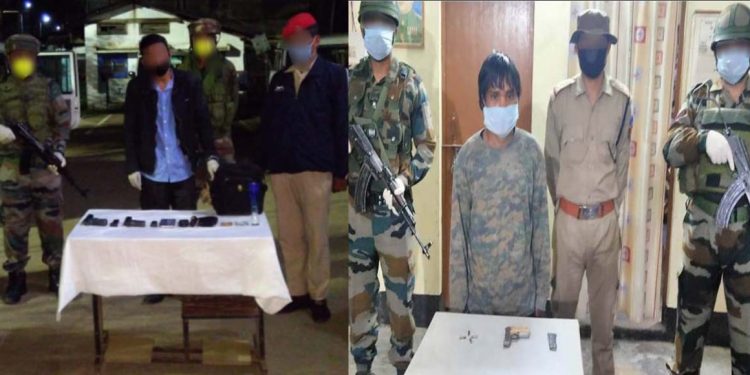 The troops of Army in a joint operation with Assam Police nabbed an NSCN(IM) cadre from a place near Lalpahara in upper Assam’s Tinsukia district on Friday.

Based on a specific input, the joint team launched a search operation in the area.

“During the operation, the troops apprehended the cadre, who has been identified as SS Private Raju Bramo, a resident of Shisupani village in Golaghat district,” Guwahati-based defence PRO Lt Col P Khongsai said.

Troops of @adgpi along with @assampolice apprehended a cadre of NSCN(IM) in Tinsukia District, Assam. Earlier in another ops, Troops of @adgpi while establishing MVCP also apprehended another NSCN(IM) with arms & ammunition near Titabor,Jorhat, Assam . @SpokespersonMoD pic.twitter.com/erNt54KJOV

During the operation, the troops also recovered one .22 pistol along with four live rounds of ammunition, informed Khongsai.

The apprehended person along with the recovered weapon has been handed over to Lekhapani police station for further investigations, he added.

Earlier, in another operation, Army troops also nabbed a senior cadre of NSCN(IM) near Titabor in Assam’s Jorhat district on April 23.

“Based on a specific input, the troops launched a swift operation and established a mobile vehicle check post in the area,” Khongsai said.

During checking of the vehicles, the troops nabbed the cadre “who was trying to escape from the check post”, the defence official said.

The nabbed NSCN(IM) cadre has been identified as SS Maj Nyaoba Konyak alias Nweypa, a resident of Ukha village in Mon district of Nagaland.

“During the operation, the troops also recovered two USA-made Beretta pistols with two magazines,” Khongsai said in a statement.

It is suspected that the cadre was actively involved in planning and conducting extortion and kidnapping activities in Upper Assam, the defence official said.

The apprehended individual and the recovered weapons were handed over to Titabor police station for further investigations.