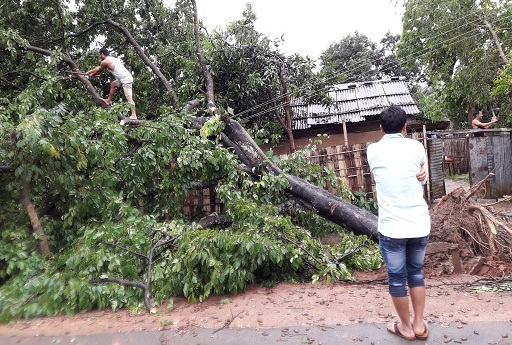 An uprooted tree at Langhin in Karbi Anglong. Northeast Now

Thunderstorm accompanied by strong wind hit both Karbi Anglong and West Karbi Anglong districts in the afternoon on Wednesday in which two persons were killed.

Besides power supply was disrupted in various parts of the district were disrupted while roofs of many houses were blown away.

In Diphu, the wind was very strong but there is no report of any damage, however, it disrupted power supply for four hours. Power supply is yet to be restored in some areas of the town.

In Howraghat town and its surrounding areas the strong wind and rain affected the normal life. Two persons were also killed in the thunderstorm in Howraghat.

While one 50-year-old Mohan Baishya was killed in Howraghat town area as an uprooted tree fell on his house. A 23-year-old woman, identified as Saraswati Harijan was killed while her house collapsed on her in Tilla Danga village under Howraghat Police Station.

“The roofs of many houses were also blown. The persons, roofs of whose houses were blown away by the strong wind, are Ruprak Das, Anjali Brahma, April Swargiary, Dhruba Brahma all in Garakhiya Pukhuri village,” informed sources.

Uprooted trees and broken branches fell on power lines due to which power supply was snapped. “There is no power in town. The roofs of many shops in Howraghat Town Chariali are also ripped off by the strong wind,” sources added.

The thunderstorm-hit people have urged the authorities concerned for providing relief and compensation.

In Kheroni under West Karbi Anglong the strong wind accompanied by torrential rain affected normal life in the area. A big branch fell down in the front of NRC Seva Kendra which is presently functioning in the premises of the Forest Department office in Kheroni.

At Amreng in West Karbi Anglong, an uprooted tree fell on a school in which a child was injured. The child is undergoing treatment at Baithalangso Hospital.

In Bokajan, the roofs of many houses were blown off by the high-velocity winds.