Tensions are mounting in Mizoram – Assam north-western border, Assam Police and para military forces are up against the Mizo Zirlai Pawl members who are attempting to build a rest shed at the paddy field of the late Chief Minister of Mizoram, Ch Chhunga.

Assam Police and Forest officials demolished a rest shed built by the apex student body of the state, the Mizo Zirlai Pawl (MZP) on Feb 27, 2018. The student body vowed to build a new rest house at the same location.

According to eye witnesses, about 500 Assam Police personel are guarding the area and dismantling every new post the students build.

“So far there is no violence, the students erected poles and posts for building the shed, but the Assam Police dismantled them,” said Zomuana Tlau, who is at the border.

Lalrothangi, the late wife of the first Chief Minister of Mizoram Ch Chhunga gave a paddy field to the MZP and the student body built a rest shed for farmers working nearby. The construction work was completed on Feb 27, 2018 with the help of villagers from the border town of Bairabi in Kolasib district. However the rest house was allegedly demolished by the Assam Police and Forest department officials on the same night. 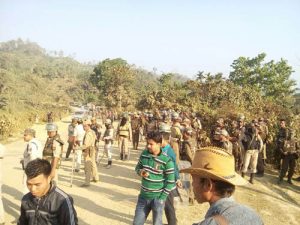 The MZP claims that the land belongs to former Mizoram Chief Minister Ch. Chhunga’s wife Lalrothangi who had donated it to them for construction of a rest shed.

Sources said that the District Magistrate of Hailakandi district in Assam has imposed CrPCC section 144 in the area.

“The DM has no right to impose criminal code within the boundary of Mizoram,” said an MZP activist from Bairabi, who had volunteered to build the shed.

Reports said that the Mizoram Administration has not deployed its police forces at the boundary.

The Home Minister R Lalzirliana had appealed to the student body not to reconstruct the rest shed to avoid further escalation of tensions across the border.