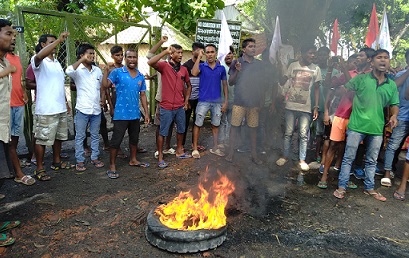 Speaking to reporters, Stephen Lakra, president of the All Adivasi Students’ Association of Assam (AASAA) while slamming the Central and State Governments led by the BJP said, “The BJP had made false promises to increase the daily wages of employees and labourers of tea estates if they come to power but till today, the BJP-led Government both at the Centre and the State has not implemented their assurance they had made during elections.”

The BJP had promised to give daily wages of tea labourers at Rs 351.33 paise per month but till date the promise has not been fulfilled.

The AASAA expressed deep concern over the issue of low wage payment (a negligible amount of Rs 167) which is less than the statutory minimum wage. The Association demanded the Government to increase the daily wage of tea garden labourers to Rs 350 in Assam.

Lakra said that the BJP Government has been keeping tea estate labourers wages in their pockets to use in the forthcoming panchayat and Lok Sabha elections.

He also termed the BJP Government as ‘liar’ and threatened to launch a massive agitation in a democratic way if their demands are not met soon.

The union also cautioned that they would not allow to carry the finish products from the factory on August 27, 2018.

He also said that all factories would be under locks if their demands are not met as soon as possible.