The setting up of a centre for verification of documents of the citizens for inclusion of names in the updated National Register of Citizens (NRC) in the Bajali College campus in Barpeta district has been opposed by a number of present and former student leaders of the college. The student leaders have also demanded removal of the NRC centre from the college campus. 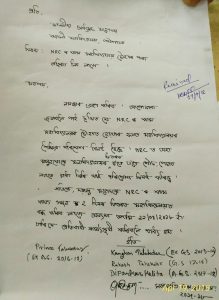 Urging the college authorities to immediately remove the NRC verification centre from the college campus, the students’ leaders demanded that the activities of NRC update process in the college be stopped within two days and otherwise threatened to launch an agitational programme on April 21, 2018 in protest against setting up of the centre.

Expressing their resentment over the setting up of the NRC verification centre at the Bajali College campus, the students of the college told Northeast Now, “We are facing lots of problem as the people, who come from different places, after entering the college campus, make noises and use the urinal and toilet, etc. of the college.”

They also said, “A healthy learning environment in college is possible only when students and teachers are provided with adequate facilities not only related to teaching and learning.”