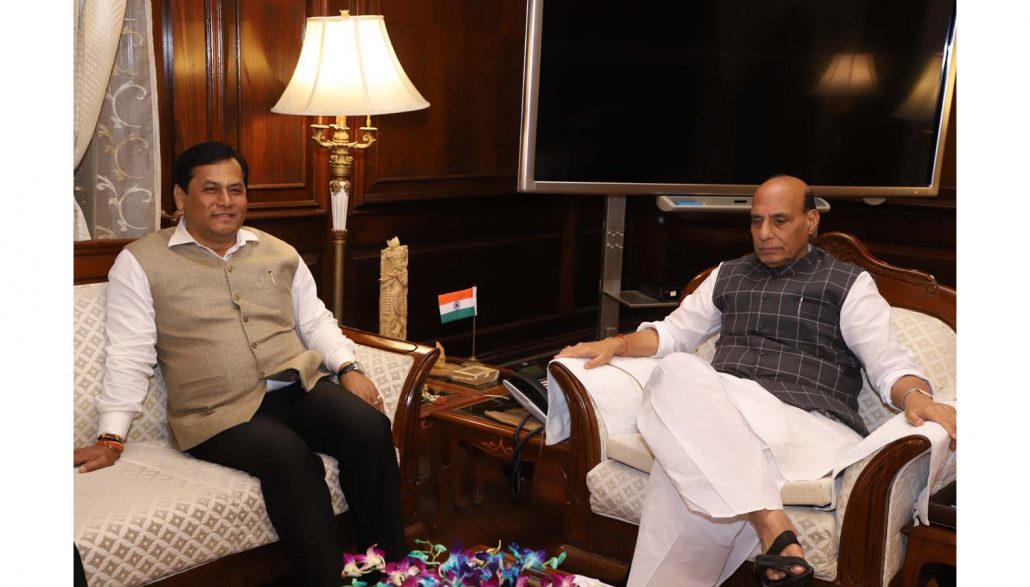 Assam Chief Minister Sarbananda Sonowal, who is now in New Delhi, on Thursday called on Union Home Minister Rajnath Singh and sought his help in expeditiously completing the international smart fencing being erected in the Assam sector of Indo-Bangla border.

In the meeting which lasted for nearly 20 minutes in the office of the Union Home Minister Rajnath Singh in the national capital, Chief Minister Sonowal also apprised Rajnath Singh about the prevailing situation along the inter-State boundary between Assam and Mizoram and with other States.

Union Home Minister Singh hailed Assam Government’s role of showing adequate restraint which averted the boundary situation to go out of control along the border with Mizoram.

Sonowal also expressed his gratitude to the Union Home Minister for his timely action which helped easing the boundary situation.

Chief Minister Sonowal also informed the Home Minister that efforts are being made for improvement of roads along the inter-state boundary, albeit much remains to be done and sought Union Home Ministry’s help in this regard.

It may be mentioned that to plug vulnerable gaps along India’s borders, the first ‘smart fence’ pilot project has been rolled out in Assam’s Dhubri district  on a riverine stretch with Bangladesh. This has reportedly been revealed by Border Security Force (BSF) Director General KK Sharma.

The project is a part of the Prime Minister Narendra Modi-led government’s ambitious plan to completely seal the India-Pakistan and the India-Bangladesh borders in the next few years which is called the comprehensive integrated border management system (CIBMS).

The maiden testing of technical surveillance and alarm gadgetry was recently operationalised on the 55-km-long stretch in Dhubri, across the river Brahmaputra, the BSF chief reportedly said.