The seventh edition of North East Festival is slated to be from November 8 this year at Indira Gandhi National Centre for Arts in New Delhi. 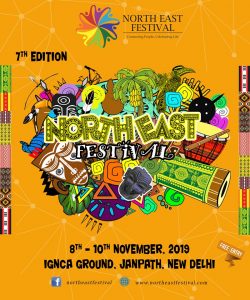 The three-day cultural festival which will showcase the diversities of the northeastern region will conclude on November 10, 2019.

The festival promises to be a grand spectacle with the presentation of the colourful dance forms of the region in addition to the display of its beautiful handicrafts and art forms.

The seventh edition of Northeast Festival will also be a great learning platform for the visitors as it will held workshops of different ethnic languages of the northeastern region.

Moreover, forty food stalls of diverse northeastern food items will be set up at the venue to satiate the taste buds of the visitors.

In order to increase the footfall of visitors in the seventh edition of the festival, a fashion show will also be held in addition to musical performances by eminent musicians of the northeastern region.

The seventh edition will also feature the much talked about rock battles between Delhi’s colleges, power rock bands of the North East and the capital.

It may be mentioned that the sixth edition of the North East Festival was held from October 26 to October 28 last year.