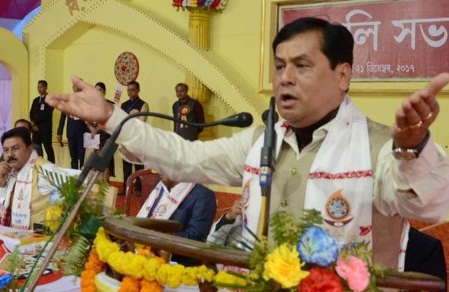 Assam Chief Minister Sarbananda Sonowal will arrive at Longkhor village in Maibang under Dima Hasao district on March 16, 2018 to participate in the 168th birth anniversary of Bir Sambbudhan Phonglo. This was informed by the Dima Hasao district administration sources on Saturday.

State Chief Minister Sonowal will also inaugurate a Kishan Mela on the occasion. This was informed by the Executive Member in charge of Agriculture, North Cachar Hills Autonomous Council (NCHAC), Subrat Thaosen.

Phonglo was born in 1850 in the small village of Longkhor at Maibang in Dima Hasao District (earlier known as North Cachar Hills). Freedom fighter Phonglo was born to his father Deprondao Phonglo and mother Khasaidi and was the eldest among five sons.

It may be mentioned that after taking charge as the Chief Minister of Assam, Sarbananda Sonowal visited the hill district of Dima Hasao for the first time on August 29 for few hours.

But this will be Sonowal’s first visit to Maibang after taking charge as the State’s Chief Minister.

It may be mentioned that recently, Maibang came to news headlines after two youths died and several others were injured in police firing while protesting at Maibang Railway Station.