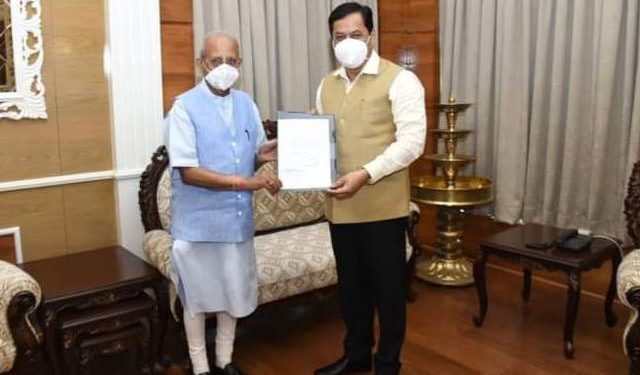 Chief Minister Sonowal and his entire council of ministers have tendered their resignations to Assam Governor  Jagadish Mukhi.

Incumbent chief minister Sarbananda Sonowal and his council of ministers resigned on Sunday paving the way for the formation of a new government in Assam.

“Chief Minister Sonowal and his entire council of ministers have tendered their resignations to Assam Governor  Jagadish Mukhi who has accepted them,” Raj Bhavan sources said.

Newly elected BJP MLAs of the state will elect the next chief minister after a meeting at Assam Assembly secretariat premises in Dispur on Sunday.

The entire process to select the legislature party leader will be carried out under the supervision of Union Agriculture Minister Narendra Singh Tomor and party National General Secretary Arun Singh who have been appointed as observers by the central leadership.

Though speculation is doing rounds on who will be the next chief minister, Assam finance minister Himanta Biswa Sarma, who carried out an aggressive campaign before Assembly polls to ensure the victory of the BJP, appears to be a front-runner and is likely to be the next CM of the state.

The BJP won 60 seats while its alliance partners AGP and UPPL managed nine and six seats, respectively, in the 126-member state Assembly.