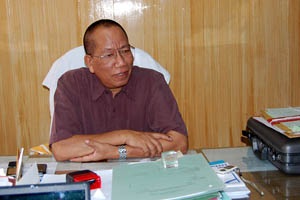 Former Karnataka super-cop HT Sangliana said his comment on the physique of Nirbhaya’s mother was nothing but a compliment. Sangliana hails from Mizoram.

Last week, at a function in Bengaluru to honour women, Sangliana had said, “I see Nirbhaya’s mother, and she has such a good physique. I can just imagine how beautiful Nirbhaya would have been.” The comment provoked large-scale criticism from the cross section of the society.

After the awful comment on Nirbhaya’s mother at a public event, Sangliana went on to advise women that “if you are overpowered, you should surrender and follow up the case later. That way we can be safe, and save our life.”

Both the comments stirred a major hullabaloo and criticism. The social media went all out against the former Bengaluru Police Commissioner.

Sangliana, also a former BJP MP from North Bengaluru had made the comment when he shared the stage with Asha Devi, the mother of the 23-year-old student whose fatal gang-rape on a moving bus in Delhi in 2012 had stirred a pan-India controversy.

While several intellectuals criticized the 74 year-old top police official for the comments, Asha Devi said the comments showed why nothing had changed in the years since her daughter’s brutal gang-rape and murder six years ago.

“The way he (Sangliana) made comments on me, it shows the mentality of our society has not changed yet,” she said. Most of the people who criticized Sangliana said he had lost his mind, and his statement was derogatory, and demanded for apology.

But, Sangliana refused to apologize. “I have nothing to clarify, nothing to withdraw, I have said what I said,” he said, adding that the comment on Nirbhaya’s mother was a “compliment” and was without any ill intention.

“I consider my statement to be totally within limits. It should be taken in the right spirit. If it was mistaken by anybody, I feel sorry for them,” Sangliana said. Justifying his statement on surrendering to rape, the super-cop said it was in the interest of the safety of women.

Sangliana has always been in controversy. He was expelled from BJP for voting in favour of civilian nuclear deal with the US for which a no-confidence motion was moved against the UPA in Lok Sabha in July 2008. Later, he joined the Congress. He contested the new Bangalore Central constituency as a Congress candidate in the 2009 Lok Sabha elections and lost to the BJP candidate, P C Mohan.

Though he is a tribal from Mizoram, he was very popular in Karnataka as a sincere and honest police officer. Three films have been made about Sangliana. He was portrayed as a super-cop in the Kannada movie S P Sangliana (1988), starring Shankar Nag and Ambareesh.