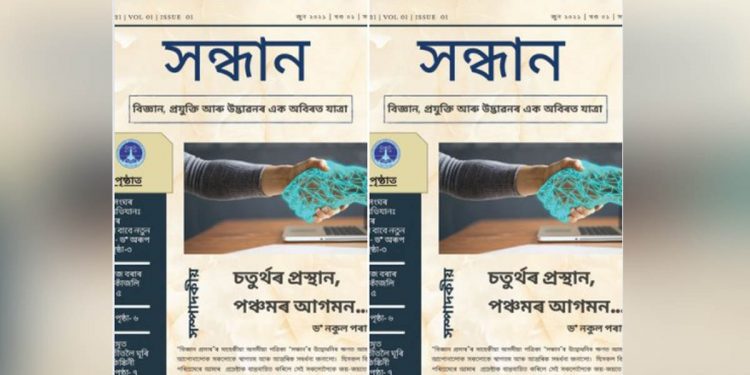 In an important development, Sandhan – the first issue of the monthly newsletter in Assamese for communicating Science, Technology and Innovation to the people was launched on Wednesday.

The newsletter was launched in an online function held simultaneously both in Delhi and Tezpur University campus.

Releasing the newsletter, Dr Nakual Parashar, director, Vigyan Prasar expressed hope that this shall go a long way in the coming days as a flagship programme in disseminating science and technology news and innovations to embrace all Assamese-speaking people, said a press statement.

Prof. Mrinmoy Sarma, dean of academics affairs, Tezpur University in his remarks said with the united efforts of all the quarters concerned, this initiative shall definitely succeed in its objectives which would be great service to the society.

The initiative, a joint effort between Department of Mass Communication, Tezpur University and Vigyan Prasar, Delhi, is aimed at creating awareness and propagation of science, technology and innovation-related latest developments for the benefit of the people.

This is the beginning of a long-term plan towards that objective including more activities in the near and distant future.

The activities are being planned under the special programme for communicating such news and innovations in Indian languages.

Following the launch in Assamese, more languages of the state would be considered for the promotion in near future.

The programme was anchored by Dr K Dasgupta Misra, scientist F, nodal officer and editor of the newsletter for this project.

Prof. Abhijit Bora of the MCJ Dept., TU, coordinator for the project, thanked Vigyan Prasar for this initiative and support in all possible aspects.