The report of the 13th rhino census at the world heritage site of Kaziranga National Park was made public on Friday morning.

According to the announcement made by Principal Chief Conservator of Forest at Kaziranga on Friday, there are 2413 rhinos in the famed national park as per the two day census conducted on Monday and Tuesday last. 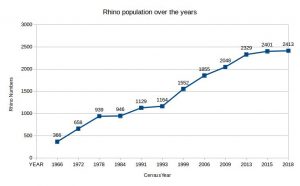 Notably, during the last census conducted in 2015, there were 2401 rhinos in the national park.

The census conducted this year shows an increase of 12 rhinos in the Kaziranga National Park.

Officials also informed that as the grasslands were not properly burnt this time become commencing the census.

They have expressed apprehension that this might have kept several rhinos outside the park area.

It is also notable that the officials engaged in the census work witnessed the carcass of four rhinos in the park.