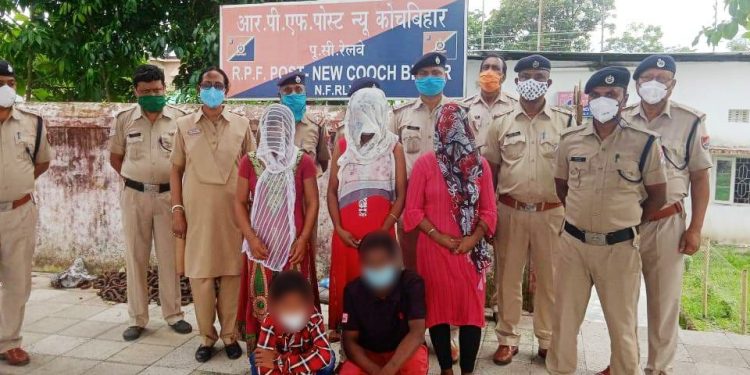 A team of the Crime Prevention and Detection Squad (CPDS) of RPF/Alipurduar and RPF staff of Gossaigaon Hat rescued one minor girl at Gossaigaon Hat Railway station.

The minor had reportedly run away from her house at Failaguri village in Gossaigaon.

She was later handed over to her father.

They had reportedly run away from their homes.

While one girl hailed from Santipur village in Kokrajhar district, two others were residents of Bengenajuli village in Sonitpur district.

The NFR authorities tested the three girls for Covid-19 and handed them over to the Fatema Balika Vidya Dham at Rangiya for safe custody.

The girl hailed from Moniyeri (Borka) in Kamrup district.

She provided the railway authorities with the contact number of her aunt, who was informed about her.

The rescued girl was handed over to her aunt after proper identification.

The RPF team under the Alipurduar division and the train escort party rescued four children from the Dibrugarh- New Delhi Rajdhani on June 12 .

The team apprehended one suspicious female travelling with the children at the New Coochbehar Railway Station.

The woman,a resident of Udalguri district was involved in human trafficking and was taking the children from Rangapara North to New Delhi to be trafficked.

A total of 403 children and women have been rescued from trains and stations during January, 2020 to May, 2021.