Priyanka Chopra shows off her Bihu dancing skills in Jorhat

Brand Ambassador of Assam Tourism Priyanka Chopra landed at Rowriah airport  in Jorhat and went to Thengal Manor on the outskirts of Jorhat.

She will shoot for several short ad films of Awesome Assam campaign in Jorhat from Sunday. 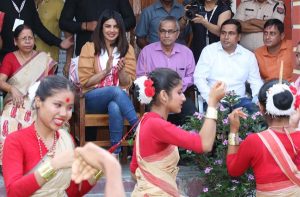 Tomorrow she will visit Mistry Sahib’s bunglow also known Burra Sahib’s bunglow  at Sungsuwa Tea garden for a shoot for the Assam tourism. She will also visit Sangsuwa tea garden, Kaziranga Golf resort Jorhat, than she will visit Neamati ghat bank of the river Brahmaputra for another shoot on natural beauty of Assam.

In one of the commercials she will be seen as a bride in a traditional Ahom marriage, chak-long.

She is also likely to shoot at Banyan Grove, another heritage resort of Jorhat.

During the course of her visit, Priyanka will be provided with high security of escorts, personals pilots, Viranganas and special police force. 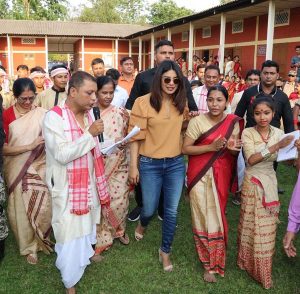 Earlier she had appeared in a few 30-second television commercials under the Awesome Assam campaign.

The annual report of the Assam Tourism Development Corporation Limited, which was released on Tuesday, said there were over six million views of commercials featuring Priyanka Chopra on Youtube.

It says that the Priyanka commercials were shortlisted for awards at ADFEST India in three categories – best film, best cinematography and best original music.

Ganja not a dangerous narcotic