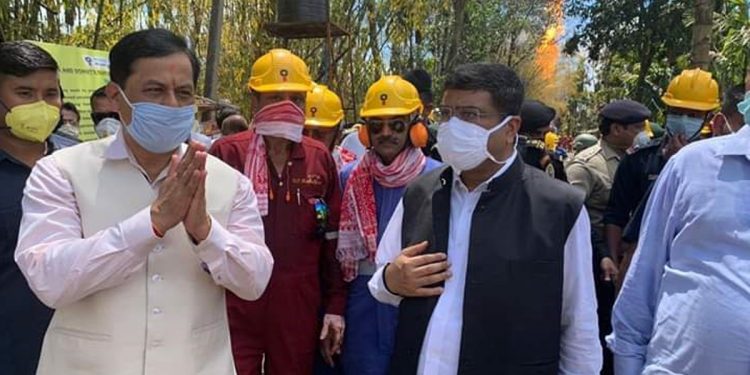 The Union minister assured of strict action against those responsible for the oil well blowout.

Pradhan was accompanied by Assam chief minister Sarbananda Sonowal during his visit.

The people of Baghjan submitted a memorandum to the Union minister.

They sought help from the Union minister for the rehabilitation of the people whose houses were damaged due to the massive fire.

More than 50 houses were gutted in the massive inferno, which affected the entire biodiversity of the region.

Pradhan said the government will extend all kinds of help towards the affected people.

“After the incident, I have been in regular touch with chief minister Sarbananda Sonowal who briefs me about the massive fire at Baghjan oil well,” said Pradhan.

“Our primary focus is the lives and property and security of the people. Many houses were damaged due to the massive fire.”

“We have assured the people to provide all the necessary help. I request the people to cooperate with us during the crisis. As you all know that Oil India Limited is your company which has been serving more than 100 years in Assam,” the Union minister said.

Union minister Pradhan, accompanied by chief minister Sonowal, also visited the relief camps at Baghjan Dhagalturung ME School to take stock of the living conditions of the affected people.

Pradhan also met representatives of Baghjan Gaon Milonjyoti Yuba Sangha along with the Assam CM and heard their suggestions for the welfare of the affected people in Baghjan.

He assured them of all possible assistance.

Met representatives of Baghjan Gaon Milonjyoti Yuba Sangha along with Hon. CM Assam Shri @sarbanandsonwal. Heard their suggestions for the welfare of the affected people in Baghjan. Also, assured them of all possible assistance. pic.twitter.com/b6RglOh1DC