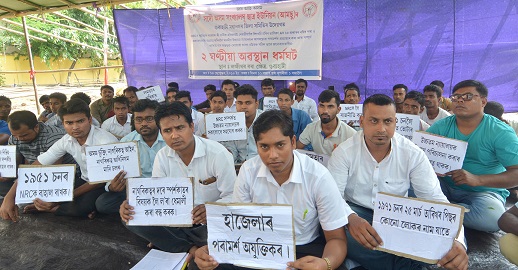 All Assam Minorities Students’ Union staging two-hour sit-in demonstration in Guwahati against NRC state coordinator Prateek Hajela for striking out five of the 15 documents listed for inclusion of names in the final NRC. Photo: UB Photos

All Assam Minorities Students’ Union (AAMSU) on Thursday staged a two-hour sit-in demonstration in Guwahati against NRC state coordinator Prateek Hajela for striking out five of the 15 documents listed for inclusion of names in the final NRC by following ‘political dictation’ of the Bharatiya Janata Party (BJP).

AAMSU alleged that the BJP has been ‘harassing’ people in the name of NRC.

Talking to Northeast Now, AAMSU advisor Azizur Rahman said, “It is clearly mentioned in the Citizenship (Registration of Citizens and Issue of National Identity Cards) Rules, 2003 (amended in 2009) that name of a person will be included in the NRC if his/her name appears in any electoral roll prior to 1971 or in National Register of Citizens, 1951.”

“Prateek Hajela suggested the Supreme Court to exclude both the vital document – 1951 NRC and electoral roll 1971 which AAMSU would never tolerate,” Rahman said.

The state NRC coordinator Prateek Hajela suggested the Supreme Court to exclude five documents including 1951 NRC, electoral roll of 1971, citizenship certificate, refugee certificate before 1971 and ration card before 1971 out of 15 admissible documents for inclusion of names in the NRC.

Rahman, while demanding the apex court to nullify Hajela’s suggestion to exclude five documents from the list, said, “AAMSU respects Assam Accord and wants an error free NRC on the basis of the historic accord.”

It may be mentioned that Assam Pradesh Congress Committee president Ripun Bora on September 11 questioned, “How can Prateek Hajela dare to submit an unconstitutional affidavit before the Supreme Court striking out five out of 15 listed documents?”

AAMSU advisor informed that the organisation would submit an affidavit before the Supreme Court on September 15 next in the matter.