In its consistent efforts to attract investors to the state, a delegation from Assam led by Himanta Biswa Sarma met with the Civil Aviation Minister of Bangladesh, Rashed Khan Menon and Minister of Industries, Bangladesh, Mr Alhaz Amir Hossain Amu. In the meeting it was decided that Novoair Bangladesh, will start Dhaka-Guwahati flights soon.

Novoair is an airline based in Dhaka, Bangladesh. Novoair operates both domestic and international flights, from its hub at Shahjalal International Airport. 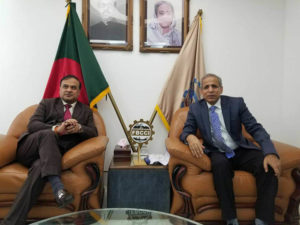 Himanta Biswa Sarma also met Federation of Bangladesh Chambers of Commerce and Industry. Minister of Commerce Tofael Ahmed, stated that he will attend Assam’s first Global Investors’ Summit to be held from February 3-4, 2018.

This event is set to showcase Assam’s manufacturing and geostrategic potential to domestic and foreign investors. The summit will be inaugurated by Prime Minister Narendra Modi and industrialists like Ratan Tata, Mukesh Ambani are set to attend the summit.

Roadshows are being held at various domestic and international locations as a precursor to the main event. Around 2,000 industry leaders and representatives from India and abroad are set to attend. The Chief Minister has had one-to-one meetings with top industrialists, including Tata, Ambani, Adi Godrej, Kishore Biyani, Gautam Singhania, Harsh Mariwala and Subhash Chandra.

Assam: PWD will be known as Lok Nirman Bibhag in Assamese