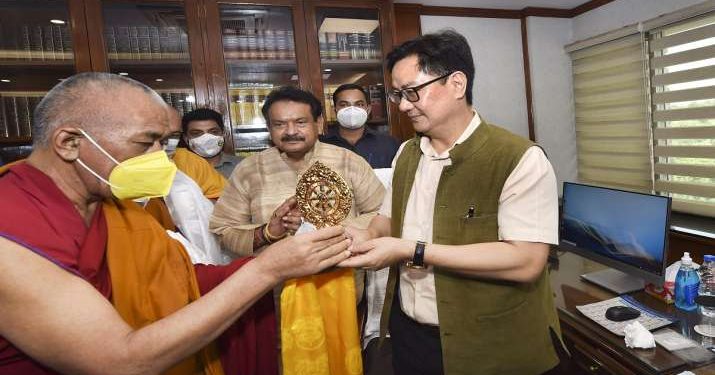 Kiren Rijiju on Thursday took charge as the new minister of Law and Justice.

A day after Prime Minister Narendra Modi reshuffled the Council of Ministers, several new ministers took charge of their assignments on Thursday.

A total of 43 new members of the council of ministers took oath of office on Wednesday.

The Council of Ministers now stands at 77, the highest in this government’s tenure.

In the new Council of Ministers, there are four former chief ministers including former Assam CM Sarbananda Sonowal in the Cabinet, 18 former state ministers, 39 former MLAs and 23 MPs.

Minister for Information and Broadcasting, Anurag Thakur, after taking charge said that his endeavour will be to work with all the media heads as a team and to take forward Prime Minister Narendra Modi’s mission.

“I am honoured to serve the people of India as a Union Cabinet Minister and take this opportunity to express my sincere gratitude to Prime Minister Sh @narendramodi ji for entrusting me with this responsibility,” Thakur tweeted.

Bureaucrat-turned-politician Ashwini Vaishnaw on Thursday took charge of the IT, electronics and communication ministry.

“I thank the honourable Prime Minister for the great opportunity he has given me to serve the nation. Telecommunications, IT and Railways. There are lots of synergies in the three and I will be working to ensure that his vision is implemented,” Vaishnaw told reporters after taking the charge.

Kiren Rijiju on Thursday took charge as the new minister of Law and Justice.

A well-known face from the Northeast in the Modi government, the Arunachal Pradesh MP was on Wednesday elevated as a Cabinet minister. Rijiju takes over the key ministry from Ravi Shankar Prasad, who has resigned from the government.