“AASU instead of blowing horns at Jaleswar and Jonia constituencies, where there is no Assamese influence, it is blowing horns against us,” says Himanta 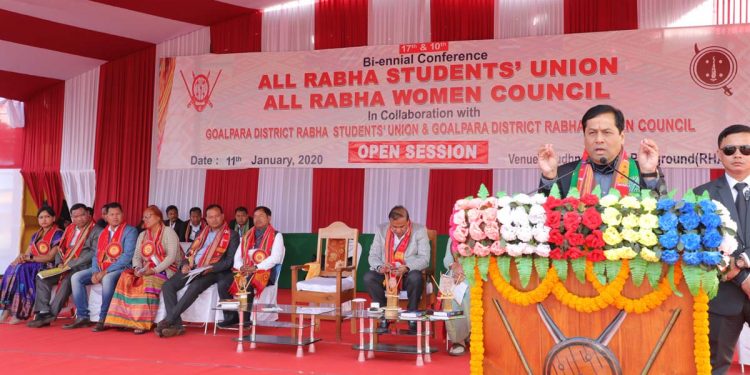 Assam chief minister Sarbananda Sonowal on Saturday announced that the government would bring a new land law soon to protect its sons of the soil and their land.

“So far the BJP government is there, the sons of the soil should not be worried for their identity and existence,” said Assam CM Sonowal while addressing the biennial conference of All Rabha Students’ Union (ARSU) and the All Rabha Women’s Council.

“Our Assam, our land and our rights…if needed, special constitutional provisions will be brought to protect all these,” added the chief minister.

Sonowal also highlighted the contributions of Kolaguru Bishnu Rabha in the field of art and culture, Birubala Rabha for her crusade against superstition and witch hunting, and late Sukrachajya Rabha for his innovative drama under the sal tree.

Assam finance minister Himanta Biswa Sarma termed the ongoing agitation against the Citizenship Amendment Act (CAA) and the BJP in the state as the ‘Bongohor juj’ (fight among own people).

“It does not look good when we fight among ourselves and the third party takes pleasure out of that,” said Sarma.

He also claimed in the present situation only five upper Assam districts are secured and in the hand of the indigenous people and the “rest of the state is under the influence of suspected Bangladeshis”.

“If someone thinks that the Baghbor and Jonia constituencies (Bengali-speaking religious minority-dominated areas) will read and speak Assamese in the next census then he is living in the third world,” he added.

The minister also attacked the All Assam Students’ Union (AASU), which has been spearheading the anti-CAA movement.

He said, “When Abhijit and Neel were lynched in Karbi Anglong district by miscreants, the AASU called the Karbi Students’ Union to Guwahati and asked them to beg apology from the parents of Abhi and Neel by touching their feet.”

“Such question didn’t come when Sanjay Ghosh, an NGO activist, was murdered in Majuli district. Then no one asked AASU to seek apology from the parents of Sanjay Ghosh,” said Sarma.

He further said, “The AASU instead of blowing horns at Jaleswar and Jonia constituencies, where there is no Assamese influence, it is blowing horns against us.”

The minister assured the ARSU leaders that the Rabha Hasong Autonomous Council areas will be kept out of the Assam Capital Region Area Development Act (ASCRADA).

He further said land rights in RHAC areas will be at the disposal of the Rabha people.

While interacting with the media persons, the finance minister cleared that GST is there since 2017 and no new notification has been issued.

He also made it clear that the Bihu committees are not required to pay GST.

However, the artists taking payments against performances will have to give 18 percent of GST, he said.

The Saturday meeting was presided over by ARSU president Romen Sing Rabha, in presence of the president of All Rabha Women Council, Hima Rabha, Guwahati MP Queen Ojha, RHAC chief executive member Tankeswar Rabha, and others.