The National Commission for Women on Tuesday condemned the “insensitive attitude” of Prag News, a Guwahat-based satellite news channel, for “sacking” a pregnant journalist.

Ranjita Rabha, a journalist, who had worked for 14 years with Prag News, was forced to resign because she was pregnant.

“Of all the rights of women, one of the rights is motherhood; however, a recent incident from Assam exposes the double-standards of organizations towards its pregnant employees,” the NCW said in a statement.

The NCW said to have come across a media report on May 22 titled “Indian Journalists Union criticises Prag News for sacking pregnant journalist”, wherein it was reported that a pregnant senior journalist was “forced to resign” from the organization. 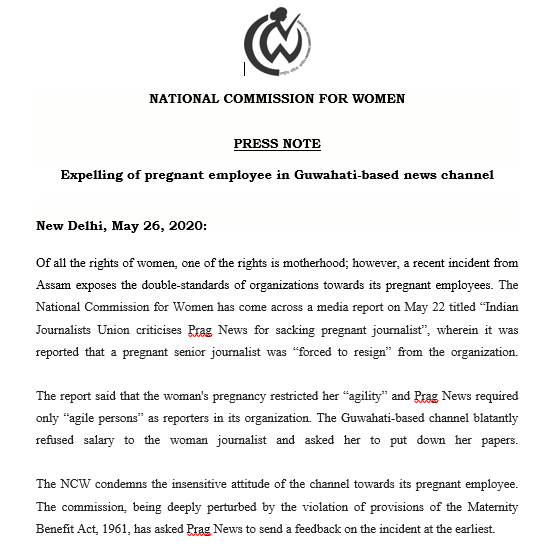 The report had said that the woman’s pregnancy restricted her “agility” and Prag News required only “agile persons” as reporters in its organization.

“The NCW condemns the insensitive attitude of the channel towards its pregnant employee,” the statement said.

The NCW, being deeply perturbed by the violation of provisions of the Maternity Benefit Act, 1961, has asked Prag News to send a feedback on the incident at the earliest.

Earlier, the Indian Journalists Union (IJU) had expressed serious concern at the dismissal of the services of Ranjita Rabha by the management of Prag News.

“As claimed by Rabha, she took up the matter with the CMD Sanjiv Narain directly, who told her that ‘Prag News has no facilities for maternity leave and no salary will be paid’ and directed her to submit resignation,” the IJU had said.

The IJU had said that Prag News channel management sacking Rabha was unacceptable and it was a “clear case of gender discrimination.”

The IJU had said sacking an expecting mother journalist who is in the frontline of the battle against COVID-19 at this critical period was inhuman and gender-biased.

The Network of Women in Media, India (NWMI) had also expressed deep shock after Rabha was forced to resign.