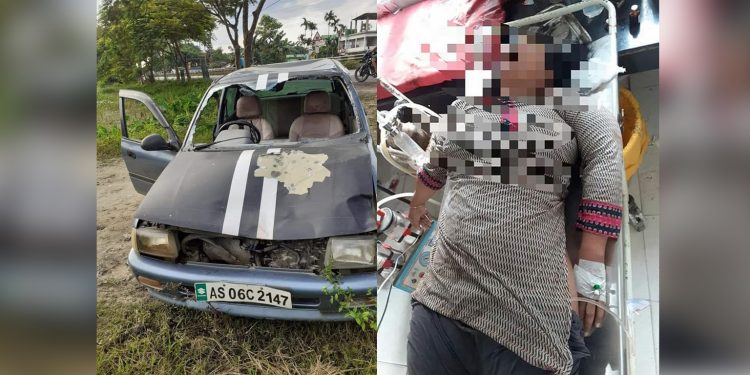 Crashed vehicle (left) and one of the deceased (right). Image: Northeast Now

Two women out on morning walk were killed after a speeding car knocked them down at Boiragimoth area in Dibrugarh on Sunday morning.

Police informed that the incident occurred at around 5.30 am when the two victims- Minu Gogoi and Jonali Dutta- were out on morning walk.

The deceased were residents of Niz Kadamoni Thermal area.

The car bearing registration number AS-06-C-2147 was driven by 21-year-old Abhinav Dutta and was accompanied by his friend Manoj Bhuyan.

A mother of two girls, Minu Gogoi died on the spot while Jonali Dutta died at the Assam Medical College and Hospital (AMCH).

She leaves behind a daughter.

Following the incident, locals thrashed the two youths and they were admitted to AMCH for treatment.

“Since both the youngsters are hospitalised we are yet to interrogate them regarding the incident,” said Dibyajyoti Dadhora, a traffic police official.

“We are not sure whether the driver has a driving license or not. Both of them are students,” he added.

“As soon as they stabilize a bit, we will take the required action,” Dadhora further said.

The victims’ families, meanwhile, have registered an FIR at Dibrugarh police station.