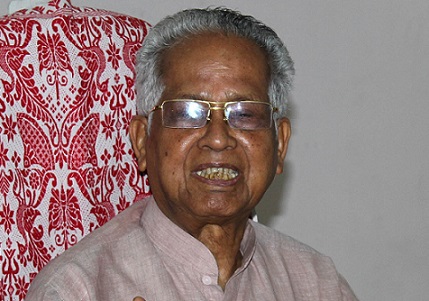 Former Assam Chief Minister and senior Congress leader Tarun Gogoi on Monday alleged that Prime Minister Narendra Modi has been playing the role of a dictator in the country.

Gogoi, while addressing a press conference here came down heavily on both the Bharatiya Janata Party-led Government at the Centre and the State and criticised the ruling party for its failure to fulfil its promises.

“The BJP has failed to fulfil the promises they made before the 2014 Lok Sabha elections and also before the 2016 Assam Assembly elections,” said Gogoi.

Stating that now no one can criticise Modi, Gogoi said, “We would be dubbed as anti-national if we criticise Narendra Modi. So we cannot criticise him.”

On the promise of an immigrant-free Assam, which was the main agenda in the BJP’s 2016 Assembly election manifesto, Gogoi questioned Sonowal, “How many Bangladeshis have been identified and deported till date?”

“They came to power by making fictitious promises during the last Assembly elections,” Gogoi alleged.

Talking about the prevailing situation across the State over the Centre’s move to pass the Citizenship (Amendment) Bill 2016 to provide Indian citizenship to Hindu Bangladeshis alleging that many Hindu people have faced harassment in Bangladesh, the senior Congress leader asked Prime Minister Modi why he could not raise the issue of alleged torture on the Hindus in Bangladesh during his visit to the neighbouring nation.

Criticising the BJP’s much-hyped slogan ‘Change’, Gogoi said, “We have not observed any change in the State during the BJP regime. People have been protesting everywhere demanding their rights. The Sonowal Government has failed to establish peace and harmony in the State.”

Former CM Gogoi further said that the Sonowal Government should have raised the issues of the indigenous people of the State before the Central Government after coming to power. “Then Central Ministers came to Assam to have discussion with the All Assam Students’ Union (AASU) leaders during the Assam Movement. But the BJP has failed to do so.”

While criticising Assam Finance and Health Minister Himanta Biswa Sarma, Gogoi said, “Himanta betrayed the Congress. He could have become the Chief Minister if he remained with the party.”

On the missing incident of Rebati Phukan, who was an active member of People’s Consultative Group (PCG) formed by ULFA to facilitate talks between the Central Government and the outfit, Gogoi condemned the Sonowal Government for their failure to trace the whereabouts of Phukan.

Moreover, Gogoi also hit out at the Sonowal Cabinet for its move to provide free laptops to only the students, who secure distinction marks in the HSLC Examination.

The former Assam CM also alleged that the BJP-led Government in the State as well as at the Centre have come to power only by using their publicity stunts.

He also attacked the BJP Government for the frequent hikes in the fuel prices.

Besides, Gogoi expressed uncertainty over the party’s alliance with Asom Gana Parishad (AGP) and Bodoland People’s Front (BPF) as an alternative arrangement to form Government in Assam. “We can think of an alternate Government only if the AGP and BJP break the alliance with the BJP in the coalition Government,” Gogoi said.

“The BJP is not in favour of withdrawing the Citizenship (Amendment) Bill, 2016. So, the AGP, which has opposed the Bill, should understand the motif of the BJP,” Gogoi said.