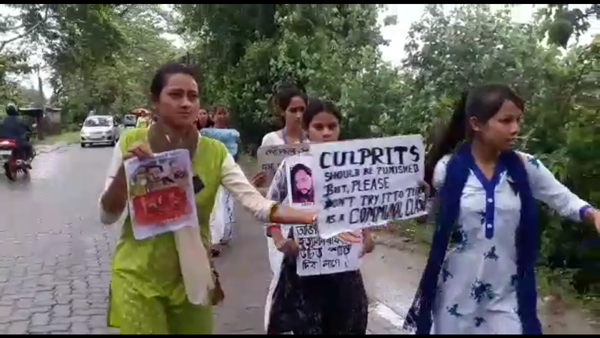 Students of Majuli College in Majuli, the island district in Assam, took out a peace rally on Wednesday.

This is in protest against the mob lynching of two artistes from Guwahati – Nilotpal Das and Abhijit Nath at Panjuri village under Dokmoka Police Station in Karbi Anglong district.

The students took out the peace rally from Kamalabari in Majuli which ended at Garmur deputy commissioner’s office.

The students also submitted a memorandum before the Majuli deputy commissioner Debaprasad Misra demanding exemplary punishment of the culprits.

The student protestors demanded exemplary punishment of the culprits involved in the brutal murder of the two youths suspecting them as ‘child lifters’.

Both the artistes – Nilotpal Das and Abhijeet Nath – were on a day’s vacation to Karbi Anglong.

To a development into the mob lynching incident probe, based on specific input police nabbed the main accused – Alfa George Timung – on Tuesday night.

The Assam Police on its Twitter handle on Wednesday stated that a total of 28 perpetrators have been arrested including the main accused along with one Vinod Lahkar in Karbi Anglong.