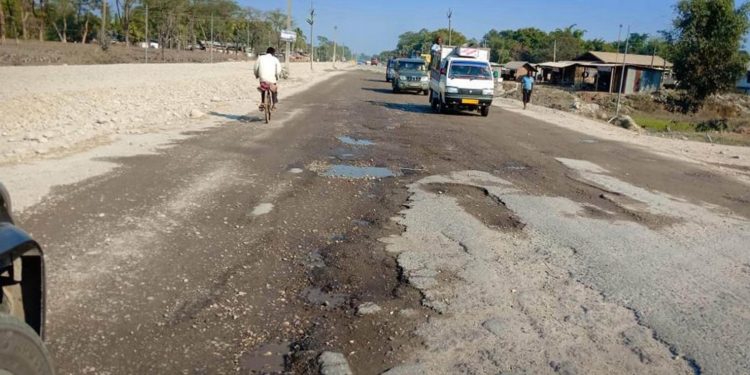 A group of lawyers in Darrang called on Mangaldai MP Dilip Saikia and requested him to take necessary actions for completing the construction of the NH 15 bypass, which is presently continuing at a ‘snail’s pace’.

The group, led by senior advocate Jayanta Deka, requested the MP to look into the matter with all seriousness and urged him to oversee the construction so that the construction is completed by March 2021.

“The way in which the construction work is progressing, we doubt if it would be completed in next 10 years,” the lawyers said citing various RTI reports.

“The Chief Engineer PWD (NH Works) issued a work order to Allianz Engineers of Chandmari, Guwahati on June 10, 2016,” they said.

“Till date, the survey of land assessment and electrical shifting work is in progress,” the lawyers further said.

“If the pace is not picked up, then the survey would take another three more years to complete,” they further added.

“Moreover, from the RTI replies it has been known that the department has not yet prepared the detail project report (DPR),” they added.

“The nearly 12 km stretch of NH-15 passing through the busy Mangaldai town has been causing traffic congestion and inconvenience to the pedestrians,” they further said.

“The early construction of the bypass is a long-pending demand of the residents of the town,” they further added.

The group requested the MP to take necessary steps for completing the survey, DPR preparation within the next ninety days.

“The clearance of DPR from Ministry of Road Transport and Highways (MORTH) should come by April 2020 so that the project could be finally completed before April 2021,” the group added.