"We only allow essential services to come in or people who are well known," says a villager

A barricade on the road of a village in Jorhat. Image credit - Northeast Now

Villages in Jorhat have had a head start over others in self-isolation barricading the roads leading to the villages with bamboo poles, ever since the countrywide lockdown began on March 24 midnight.

On the bamboo gate-like structure there are banners where the reasons have been written for the barricades under the instructions of the Village Defense Party (VDP).

Roman Saikia, a resident of Hahnpuria Village in West Jorhat under Pulibor police station said about 100 villages in the locality had been isolated in this manner under instructions of the VDPs or in the absence of the VDP by the villagers themselves.

“We only allow essential services to come in or people who are well known. All others are barred entry,” he said. 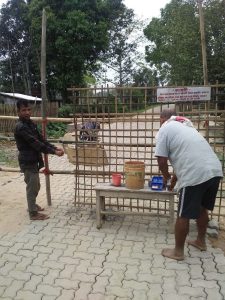 Saikia further said the North East Institute of Science and Technology has also helped them by providing banners with lists of the dos and don’ts as well as a short explanation of the novel Coronavirus (Covid-19) pandemic.

Among the dos, the people are asked to wash hands frequently with soap for 30 seconds and to maintain social distancing.

And among the don’ts, the people have been asked not to touch eyes, nose, and mouth with unwashed hands and also not to shake hands but to salute someone with a ‘Namaste’.

A source, however, said the villages should barricade their own gates instead of the road leading to the village as this has created problems in carrying essential commodities to the village.

The nationwide lockdown was announced by Prime Minister Narendra Modi from March 24 midnight as a preventive measure to contain the spread of Covid-19.