Journalism has huge role in era of globalization: Assam Governor 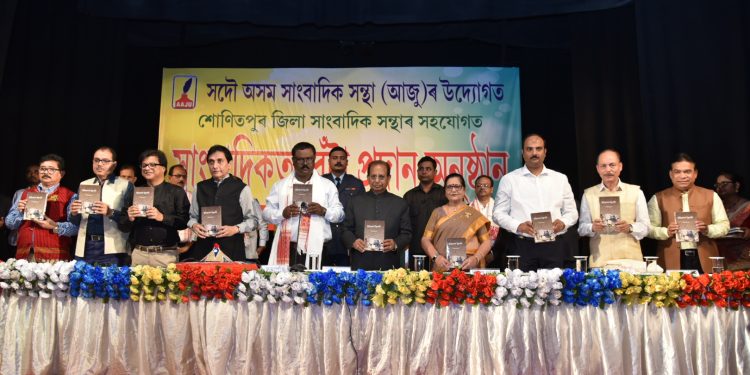 Assam Governor Prof Jagdish Mukhi said in an era of globalization, journalism has a huge and sacred responsibility to play.

Never, before in the last 200 years, did the developing countries have an opportunity to be on the limelight as they do today in the age of globalization, he added.

He said this at an award giving ceremony at the historic Baan Theatre in Tezpur on Friday.

The Governor conferred award on eminent journalists of the State.

Prof Mukhi said more than half of the world’s GDP, measured at purchasing power parity is generated by developing countries.

He, therefore, said that the journalists in India have greater role to play in disseminating information and mobilizing the people exclusively to highlight the development narratives.

He also requested the journalists in the State to set good examples of global integration and become the mouthpiece to convey the contribution of the developing world to the global economy.

He also said journalists are the brain behind the cross-national transaction.

He added it is because of their unrelenting involvement, people across the globe get to know the fruits of globalization.

Stating that India is proud of free and responsible Press, he called upon the journalists who are the fourth pillar to democracy, to play greater stake towards the growth of the nation.

He also retorted that media should play the role of a moral watchdog to ensure that it maintains high moral standards and keep itself free from the influence or threat of any extraneous factors.

Free press is one of the foundation stones for successful democracy and it is an essential pre-requisite in a world of challenging phase of media reporting.

Referring to Edmund Burke, a member in the House of Commons who termed the journalists as the fourth pillar of democracy while delivering his speech in the Parliament, Governor Prof Mukhi said to uphold the spirit of freedom of press the journalists should resolve to work ethically without any fear or favour.

Governor Prof Mukhi while paying tributes to the Father of the Nation, quoted Mahatma Gandhi regarding journalism who said, “One of the objectives of a newspaper is to fearlessly expose popular defects”.

The Governor, therefore, urged upon the journalists to realize the power of truth and adequately expose the wrong doers through their journalistic pursuits.

He also asked the journalists to become a power to the society and a conscience.

He thanked them to be the stalwarts of the Journalism in Assam and become a source of inspiration to the budding journalists.