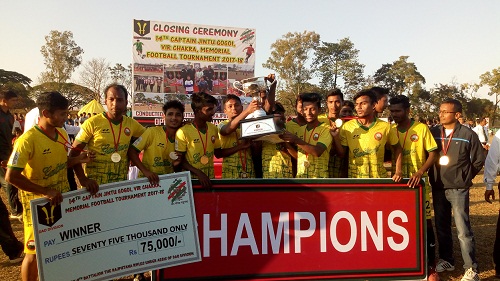 Dipankar Musharary of Jorhat Town Club scored the lonely goal for his team in the 56th minute.

The tournament was organised by the 9th Rajputana Rifles.

Altogether 16 teams of the state participated in the tournament.

For the first time, the tournament was organised at Victory Polo ground.

In his speech, Major General Gajendra Singh, General officer Commanding Dao Division appealed to the young generation of Assam to idolise Captain Jintu Gogoi and work hard for the development of the country. Gajendra Singh thanked the crowd for their overwhelming response to make the tournament a grand success.

Captain Jintu Gogoi was posthumously decorated with the Vir Chakra for displaying great valour and courage while leading his troop and fighting the enemy in extreme harsh weather and inhospitable mountainous terrain during the Kargil war. The young captain single-handedly killed two enemy soldiers before making the supreme sacrifice for the nation.

The Kargil war claimed the lives of 527 Indian soldiers.