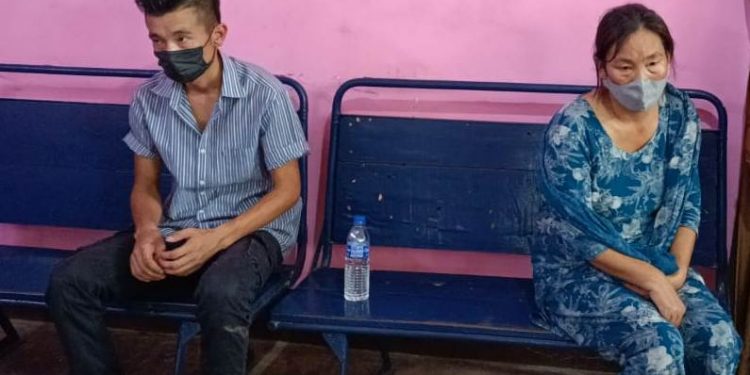 In a major breakthrough, the Karbi Anglong police have arrested two people including a woman who is allegedly the kingpin of an inter-state drug cartel based in Nagaland.

Police have also seized a huge quantity of drugs and a Maruti Alto car from their possession.

The seized consignment includes 164 packets containing 2.12 kilograms of fine quality heroin worth over 4 Crores in the black market.

The arrested have been identified as 50-year-old kingpin Th Paone alias “Didi” of Senapati, Manipur and 23-year-old Kevin Movi of Dimapur, Nagaland.

Karbi Anglong police have reportedly been tracking “Didi” for the past couple of weeks before she was arrested on Thursday.

Pusparaj Singh, Superintendent of Police, Karbi Anglong said, “We learned about “Didi” while investigating a recent case pertaining to narcotics seizure in Barpathar police station of Karbi Anglong district. John Das, APS, SDPO Bokajan, followed the leads and found that “Didi” is a major player in the Narcotics trade based in Dimapur and she is alone responsible for over 60% of all the illegal drug entering Assam through NH-36 and NH-39 in recent times. After days of effort, our team managed to obtain her phone number and she was under our surveillance.”

“Recently, we learned that “Didi” was on the lookout for new customers as her former customer base eroded due to the persistent seizures and arrest made by Karbi Anglong police. We took this as an opportunity and placed our source as a customer and a deal was fixed. She came to deliver the drugs and landed in our trap. It was a difficult task convincing her,” the SP added.

The arrest of “Didi” is considered a major breakthrough for the Karbi Anglong police in disrupting the supply chain of this illegal narcotics trade.

The NH-39 and NH3-6 connecting Nagaland and Manipur with Assam are considered as the floodgate of this illegal narcotics trade and drug trafficking through these highways continued unaffected despite a regular crackdown by Karbi police.

In the past couple of years, Karbi Anglong police alone have seized Heroin, Opium, Crystal Meth, Ganja and thousands of “YABA”, “WIY” tablets worth over 100 crore in the black market.

“Origin of these seized drugs can be aligned to the infamous “Golden Triangle” bordering Myanmar, Laos, and Thailand. These drugs are smuggled into India from Myanmar via Moreh in Manipur and some areas located strategically along the Indo-Burma border. These drugs then reach Manipur’s capital city Imphal and are further smuggled in smaller quantities into different parts of the country through Nagaland and Assam,” a police officer said.