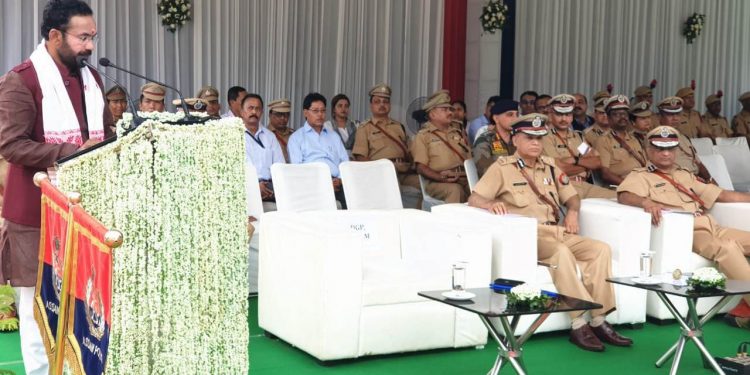 Union minister of state for home affairs G Kishan Reddy said there has been reduction in casualties of police personnel and civilians.

Reiterating Central government’s zero-tolerance policy against terrorism, Union minister of state for home affairs G Kishan Reddy on Monday said that India’s internal security has improved to a large extent and that there has been reduction in casualties of police personnel and civilians.

Reddy said this here on Monday while speaking at a function organized as part of the Police Commemoration Day.

The minister also asserted that Indian forces have been capable of thwarting all threats to internal security.

“Assam police personnel have sacrificed their lives in battle against militants and insurgents, maintenance of law and order, tackling crime, ensuring security in the border areas apart from helping the needy in times of floods and other natural disasters,” the minister said.

He added that a total of 879 Assam Police Personnel have laid down their lives for maintenance of law and order in the state since 1964.

Acknowledging the exemplary service rendered by Assam Police, the Minister said that in the several decades of fighting insurgency and militancy Assam Police have displayed great professional qualities, courage and valour in the conduct of counter intelligence operations.

Lauding with great pride the supreme sacrifice shown by the Police Personnel, Reddy said that it is because of them that the security situation in Assam has completely changed and they have ushered in an era of peace and prosperity with a fillip to investment opportunities in the state.

“The entire state is carrying forward the Vision of Prime Minister Narendra Modi of Act East Policy both in true word and spirit, he added.

While speaking to the media the Minister appealed to all the remaining militant or insurgent groups of the Northeast to lay down their arms and join the mainstream where they can also contribute to progress of the nation.

He added that everyone should abjure violence and in a democracy like India, there is no place for violence and that every difference can be sorted out through dialogue in a peaceful manner.