Imbibe sense of belonging towards your motherland: Assam Assembly Speaker

The Speaker called upon the students to imbibe a deep sense of belongingness towards the motherland.

He said that such sense of belonging inculcates patriotism in citizens.

The Speaker also opined that the Assembly reflects hopes and aspirations of the citizens of the State.

“The public representatives give voice to the expectations of the people of their respective constituencies in the Assembly,” Goswami said. 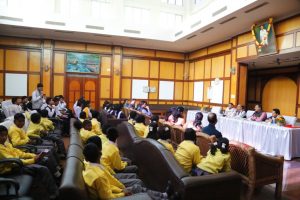 The Speaker also appealed to the students to uphold the democratic values of the society. He asked them to take active part in the nation building initiatives and hoped that the experience gained by them through the exposure visit to the Legislative Assembly would immensely enrich them.

“This will sensitize the students about the vibrant democratic process of the country and also make them aware of the contemporary and relevant issues,” said Patowary.

Taking part in the interaction, the students also shared their experience on the proceedings of the House.

As part of the programme, the Speaker gave away certificates of participation to the visiting students.