In order to transform two villages affected by human-elephant conflicts to usher in socio-economic development, the Institute of Advanced Study in Science and Technology (IASST) has adopted Bakarapara and Kallapara under the Rani block on the outskirts of Guwahati.

“The people of both the villages are dependent on agriculture. But they were affected by human-elephant conflicts. In 2016, we started this project for the socio-economic development of the people by training them,” Consultant of Tribal Village Development Programme, Prakash Kr Kachari said.

The products were displayed at a stall during the National Science Day held in IASST on February 27 and 28.

IASST facilitates the farmers by connecting the products to the market through various tie-ups. 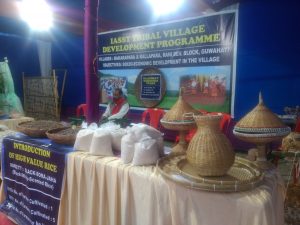 “Recently, we introduced machines for reeling of eri to increase the income of the households. Although the cocoons are sold at Rs 700 per kg, the market price of the eri threads is double,” Kachari said.

“Last month, we earned around Rs 35,000 just from the eri initiative,” he added.

Around 80 families are involved in duck rearing and in December 2017, a total of 700 ducklings were distributed.

“Apart from the economic scenario, our next step is to work for the cultural development of the people of the two villages as well. We also recently organised a village cultural day where the young children took part with great enthusiasm,” Kachari noted.