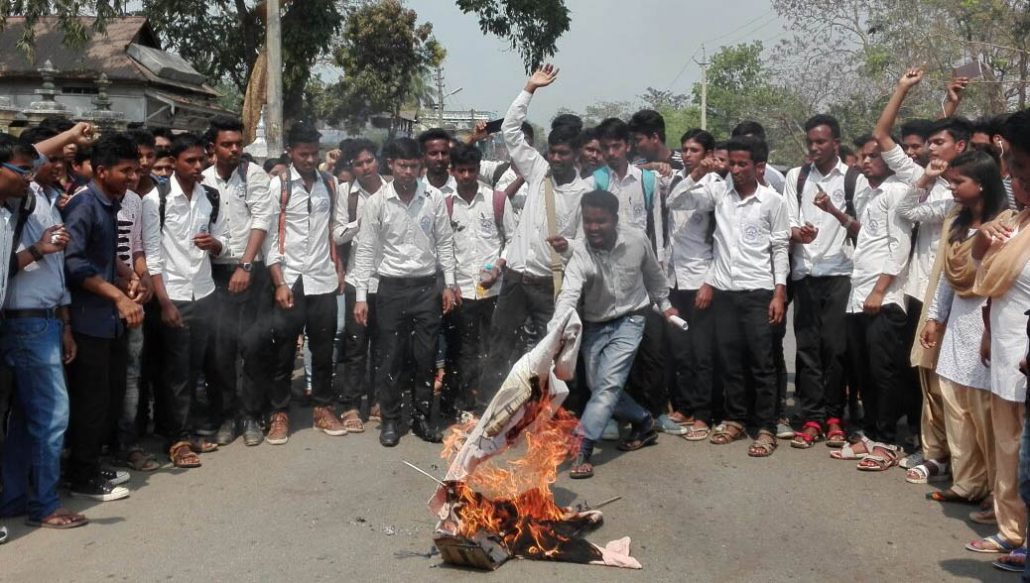 With the news of question paper leak making headlines, Satra Mukti Sangram Samiti (SMSS), the students’ wing of the Krishak Mukti Sangram Samiti (KMSS), on Saturday lodged an FIR at the Goalpara Police Station against the Science Academy, Goalpara and the Assam Higher Secondary Education Council (AHSEC) officials besides others seeking action holding them responsible for the leak.

The organisation demanded immediate inquiry and punishment of those who are involved in the alleged leak of question papers.

Through the FIR, the organization sought action against Kamaljyoti Gogoi, Secretary, AHSEC, Chairman of the Council, Fojlul Karim Mondal, Principal of Science Academy, Goalpara, the Science Academy authority and Inspector of Schools, Goalpara.

Along with the FIR, the students’ organisation also submitted the sample question papers which were distributed to a section of its students residing in hostels by the Science Academy, Goalpara and the actual AHSEC question papers and there were 100 pc similarities between the two sets of question papers.

Meanwhile, the agitating students of Goalpara College under the leadership of the All Assam Students’ Union (AASU) burnt the effigy of Assam Education Minister Himanta Biswa Sarma on the road of the town.

The students also shouted slogans against the inactiveness of the State Education Department and warned not to play with the future of the students. “We demand re-examination of the papers which have been leaked,” stated Jitumoni Bhuyan, Secretary of Goalpara district AASU.

The SMSS on the other hand burnt Kamaljyoti Gogoi’s effigy on the road in front of Goalpara College field protesting the question paper leak. “This is really disgusting that some of the AHSEC office-bearers are still trying to safeguard the controversial Academy despite everything is clearly brought out before them,” remarked Aminul Hoque, Education Secretary of the central committee of SMS and the president of the Goalpara district SMSS.

He further alleged, “Institutions like Science Academy are running a lucrative business keeping an evil nexus with some of the Council office-bearers.”

Cross-sections of people have come down heavily on the authorities concerned over the mystery of the sudden and overnight rise of the private institution and criticised its controversial teaching method.  A section of conscious citizens have also demanded shifting of the examination centre of the institution from PR Govt HS & MP School to Goalpara College for better monitoring of the activities of the Academy.

Bitu Sonowal, President, SMSS said, “Despite AHSEC Secretary Kamaljyoti Gogoi visiting the Science Academy, Goalpara and giving clean chit to the institution, we have found that question papers were leaked. This shows that Kamaljyoti Gogoi is also involved in this incident. We demand high-level probe and arrest of those found guilty.”