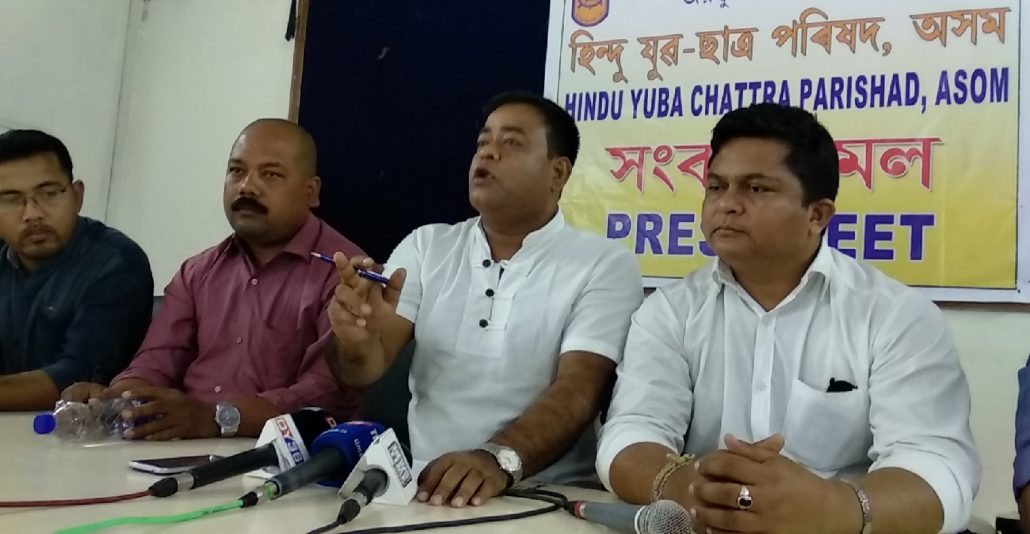 Addressing a press conference at the Guwahati Press Club on Saturday, Parishad President

Balen Baishya said, “During the Assam visit of Bangladeshi President Md Abdul Hamid, the Hindu Yub Chatra Parishad, Asom burnt his effigies on the streets in different parts of Assam including the city.”

Baishya stated that on that day the Parishad staged protests in support of their various demands. They demanded that Rangpur, Chittagong and Srihatta districts, which have been allegedly encroached by Bangladesh for the last 70 years, be made encroachment-free, alleged harassment on the Hindu-Bangladeshis living in Bangladesh and the process to deport them to India be stopped, give the required land to India for rehabilitation of the Hindus, Christians, Buddhists and other non-Muslims, who came from Bangladeshis and are taking shelter in India have been taking shelter in India. They also demanded that the Bangladeshi government should immediately take back the Bangladeshi Muslims who illegally entered into India.

Baishya also said, “Though we staged the effigy burning programme in a democratic way but the police forces dragged me, our General Secretary Dipankar Gohain, and detecting seven of the leaders had boarded in a vehicle.”

However, though the police lodged a case against them in Dispur Police Station, they were kept in Hatigaon PS for the whole night, he informed.

Baishya also alleged that in the name of questioning they had to face atrocities by high-level police officials. He also stated that they were taken to the court like criminals with handcuffs in their hands.

He also added that they were kept in the jail from march 9 to March 15.

The Parishad President alleged that whenever, they raise voice seeking solution to Assam’s burning issues, the ruling forces jump on them.

At the press meet, Baishya asked Chief Minister Sonowal to clarify whether Army Chief Bipin Rawat’s statement on Bangladeshis’ influx into Assam or Md Abdul Hamid’s statement on ‘no Bangladeshi in Assam’ is correct.