Himanta took to Twitter to congratulate the two shuttlers at their stupendous success.

‘What a joy seeing you dominate the game

The thrill of this incredible victory by you at the #BWFWorldChampionships is momentous. You deserve our finest applause. So very proud moment for India!’ 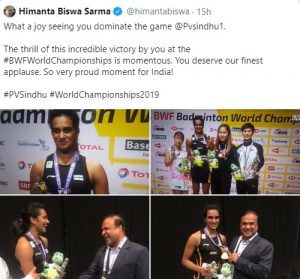 Sindhu’s gold is the second medal that India won at the Worlds this year with Sai Praneeth winning a bronze in men’s singles category.

‘What a glorious day for Indian badminton!

@saiprneeth92 as you win a bronze medal at the #BWFWorldChampionships2019. It is after 36 years that an Indian male shuttler has won a medal at #WorldBadmintonChampionship.

I am immensely happy and proud at this feat.’ 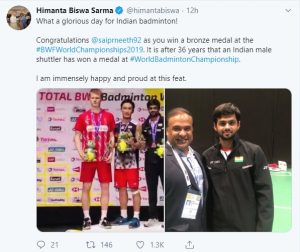 The social media is being flooded with congratulatory messages to the two glorious players of Indian badminton.

From politicians to sports persons to filmstars and celebrities from the entertainment industry are congratulating the two shuttlers.